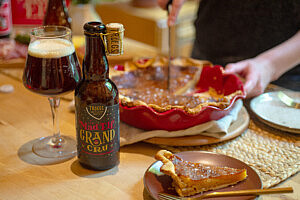 If you know Tröegs, you know the Mad Elf – the legendary once-a-year holiday ale that helped put our little brewery on the map. Mad Elf Grand Cru is like Mad Elf, but with a tart twist.

Both start with chocolate, Munich and Pilsner malts and see a large addition of local honey. Also, both are fermented with a spicy Belgian yeast, which contributes notes of cinnamon, clove and allspice.

Balaton cherries – loads of them – make all the difference. Mad Elf Grand Cru clocks in at the same 11% ABV as Mad Elf, but the color is closer to a burgundy and the flavor is notably more tart.

“We like to call this the Director’s Cut,” says brewmaster and founding brother John Trogner. “Look for notes of tart cherries, brown sugar, cinnamon and clove.”

Mad Elf Grand Cru is now packaged in 375-ml cork & cage bottles.“Putting this beer in 4-packs of 375-ml bottles helps give it that extra special touch,” says founding brother Chris Trogner. “We use the same bottles for beers like LaGrave and Jovial that we bottle condition, and we know the corks are great at keeping that extra pressure in. That means they’re also great at keeping oxygen out. For a beer like Grand Cru that people like to age, that’s a big plus.”

Manufactured by Ardagh Glass Packaging – North America, the Belgian glass bottles are made out of 100 percent and endlessly recyclable amber glass, produced right here in the U.S.

The once-a-year Mad Elf Grand Cru begs to be gifted (or better yet, shared). Take a 4-pack home, gather your friends, and cherish the cherries.

Find it near you at troegs.com/brewfinder.