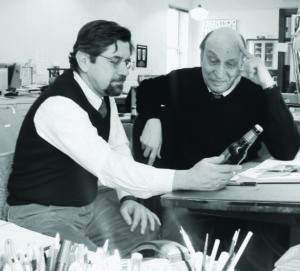 Milton was a mentor and a friend to me for 34 years.  My wife Ellen and I and our daughter Lily shared many dinners with Milton and his wife Shirley over those years.

My first meeting with Milton did not come easy.  I had talked to more than 30 design firms looking for someone to help me develop an identity and logo for Brooklyn Eagle Brewery, an idea I had cooked up with my downstairs Brooklyn neighbor, Tom Potter.  None of those firms had given me confidence they could do the job.  Ellen suggested I call the best in New York City.

Tom and I took meetings with partners at Chermayeff and Guismar and Pentagram, both top tier design firms.  But when I called Milton Glaser’s office, the manager, Eva, blew me off.  “Do you know who Milton IS?” she asked in a haughty tone.

“He doesn’t talk to anyone who calls here,” she said.

“Well, I am president of Brooklyn Brewery,” I offered.

“Exactly,” she said.  “Who ever heard of Brooklyn Brewery?”

I bugged her daily for a week or so, calling from my day job as a foreign news editor at Newsday.

She finally relented.  “You aren’t going to give up, are you,” she said.  She put Milton on the line.  I blurted out my 30-second elevator pitch.

We could never afford Milton’s fee, so instead he took a 5% stake in our company.  We paid him hourly for his work.  It was not cheap.

At our first meeting, he convinced me to drop the Eagle from our name.  I had wanted to reference the Brooklyn Eagle, a venerable Brooklyn newspaper.

“Don’t say a word,” he said.  “Take it home, live with it, show it to your wife.”  I did.  Ellen loved it and eventually, the simply beauty of that swooping B won me over.  Many mistook it for the old Brooklyn Dodger’s logo.  But there was no B like this on Dodger uniforms.  Rather it was in the style of the “Dodgers” logo on the players’ jerseys.

Milton said he based the logo on classic European beer labels like Pilsner Urquell.  The B came to him when contemplating the swirls in the head of a glass of beer.

Over the years, Milton guided our stewardship of the Brooklyn brand.  When sales struggled in the early days, I considered creating a new brand using my family name: Hindy’s Chocolate Stout, based on my homebrewing recipe.

“No, no, no,” said Milton.  “Stick with Brooklyn.  You are just getting started.”

Milton picked the slogan for our first poster out of an offhand comment I made about serving Brooklyn. “We Serve Brooklyn” was the slogan.

When we built a brewery in a run-down matzo bakery in the Williamsburg section of Brooklyn, Milton counseled us to paint the building bright yellow.

“Milton, we are surrounded by abandoned buildings that are slathered in graffiti,” I said.  “The graffiti artists will kill us!”

“Oh c’mon,” he replied.  “If you don’t try to bring some beauty to the neighborhood, who will?”

So we painted the building yellow and the artists left us alone.  I think maybe they respected our building and our logo because we were taking care of our property, unlike other property owners who allowed their buildings to deteriorate and become canvases for graffiti.

Milton also applauded our decision to reject traditional advertising in favor of donating our beer to not-for-profit organizations and arts organizations.  We got our beer into the hands of thousands of people and developed much good will in our community.  To this day, we are committed to this sort of guerilla marketing.  It works.

During the 34 years I knew him, we got together for lunch two or three times a month, usually at an affordable restaurant near his storied office at 207 East 32nd Street, the site of his first venture, Push Pin Studios, and the birthplace of New York Magazine.  Milton Glaser Inc. sounded like a big firm, but it was just Milton and 8 or 10 collaborators.  He did all the creative work.  He refused to touch a computer, but he coached his young associates as they worked on computers.

He once told me that he started out to build a big firm, but found himself working as the director of human resources instead of creating art.  He downsized and found his place.

Milton loved discovering great local affordable restaurants.  He was the original “Underground Gourmet” at New York Magazine, profiling these sort of restaurants.  Occasionally, we would splurge with a lunch at Union Square Café, Tabla or Maialino.

Milton worked right up to the day when kidney failure forced him into a hospital.  He always said his biggest fear in life was retirement.  I was deeply impressed by his industriousness.  He recently published a wonderful collection of his posters.  He and his partner Walter Bernard also this past year published a book titled “Mag Men” cataloguing the many magazine and newspaper designs they created.  Milton was working on a new volume of illustrations.

He always said the success of the “I Love NY” logo surprised him.  I think every locality in the world has adapted that logo to promote itself.  Milton believed deeply in the power of symbols and art to connect with people emotionally to change the world.  During the financial crisis of 2008, he created a series of buttons; I recall one that read, “No CEO Left Behind.”  A few years ago, he created buttons and t-shirts printed with a black circle with only a small green crescent visible on one side.  The slogan read, “It’s Not Warming, It’s Dying.”

Perhaps above all, Milton was a passionate and dedicated teacher. I frequently run into former students who tell me about the original ways he taught design.  One recalled a class in which he assigned the class to keep track of everything they ate for a week.  He collected the lists, passed them out randomly and asked students to draw the person responsible for their list.  She said the similarities of the drawings to the authors of the lists was uncanny.

Over the years, he influenced thousands of students.  His art, his design and his humanity touched the lives of millions.  I know we all miss him sorely.