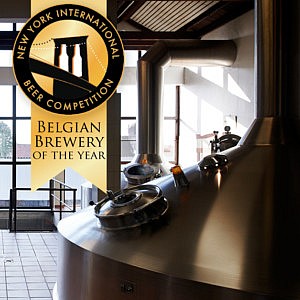 The New York International Beer Competition announced its winners for 2016.
The Van Steenberge Brewery from Ertvelde can stick another feather in its cap. With their increasingly popular and delicious beers, they snapped up the coveted title of ‘Belgian Brewery of the Year’.

The Van Steenberge Brewery is incredibly proud of this award. ‘We work on our beers with so much enthusiasm. Of course, we are very happy any time we win a prize. We work on our products with a great team of passionate people. So, a prize like this is a nice show of appreciation, commented Jef Versele, Business Manager.

Van Steenberge was awarded this position by the New York International Beer Competition for its high-quality, accessible and authentic exclusive beers. A nice acknowledgement, since at Van Steenberge the brewing of beer stands for mountains of passion, talent and perseverance. This title allows the brewery to capitalize on the world-wide appreciation for Belgian beer, which is also brewed with technical mastery in Ertvelde.