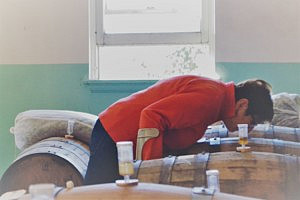 When Cédric’s parents visited from Belgium last fall we brought them into the barrel room, which has matured significantly since their last visit in 2014. Cédric pulled the plug on a barrel from 2015 and after taking a big whiff his mum exclaimed: ‘it smells just like the beer we drank when we were kids!’ – LOL! oh Belgium! Why are you so awesome?!

This years Hulk release is a continuation of Scott and Cédric’s exploration of the solera process.

First a saison was brewed to act as a base beer and then the fun began. 3 years worth of wildly fermented beer from our Bois Sauvage series were blended. Barrels from 2015, 2016 and 2017 were chosen for their cohesive flavours: the 2015 barrel was very dry with mineral flavours; 2016s was quite sour and fruity while the 2017 barrel was funky and tart.

The flavour profile of this beer is complex, there is no other word for it. Dry and minerally while at the same time fruity and estery. The Brettanomyces flavours are subtle, less horse blanket more pineapple.

Quartz, lucky number seven in our Hulk series, showcases what our patience, vision and dedication bring to the BC craft beer scene.

This beauty will be released in the Townsite tasting room on the seventh day of June and will hit the mean streets the week of June 11th. Ask for it, watch for it, you are gonna love it.

A note about the label: each spring we release a beer in honour of the concrete ships that make up the breakwater around the Powell River paper mill. Each year we select a local artist to create the label for us, giving them a ship to represent visually and no other direction. This year Mark Short was chosen, his illustrations won us over and we absolutely love how it turned out.