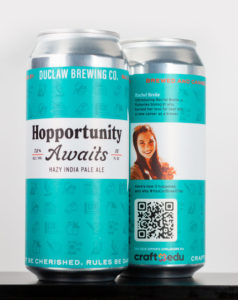 Meet Rachel Breite,a fisheries biologist who turned her love for beer into a new career as a brewer.

Before entering the brewing industry, I was working as a fisheries biologist on commercial fishing boats. I always really enjoyed craft beer as a drink, and it was my go-to beverage.

My degree is in marine biology and environmental science, which seems like a far cry from beer, but there are more similarities than people think.

A few years ago, I was in my mid-life crisis stage. Looking at the job I got right out of school, I realized I was going to have to go back and further my degree. The chances of me coming back to the same position was pretty high, as there’s not a lot of opportunities in the marine biology field. It was a huge blow to my ego, and was really unfortunate. I wasn’t sure if I was able to realize my childhood dream.

But it was a blessing. I was working in Ye Olde Brothers Brewery, a small, two-barrel brewery in the town of Navarre, Florida, and I was just waitressing at the time. I was always peeking my head in the back asking questions about the craft beer, like, how’s the honey wheat doing? Is the porter coming out soon?

Part of it was luck, part of it was hard work, but I ended up getting asked if I would be interested in learning more about the creation side of craft beer and the brewing side.

The owners at this brewery recognized I had a lot of science and water chemistry background, and they saw it was valuable in this industry, so I utilized those tools to get my foot in the door as a brewer.

After working for a few years at Ye Old Brothers Brewery, I realized we wanted to go different directions creatively, so I sought out other opportunities. Knowing the head brewer at  3rd Planet Brewing, I reached out to see if he needed any help.

Turns out it was the same day they got their canning line, and now I’m celebrating my two years there this year.

What I really like the most is the creative-ness of it all. It’s amazing to me how creative everyone can be. The style of an IPA, there are so many varietals on that one type of beer. I like that brewers are really thinking outside of the box for new techniques, flavors, styles etc.

That’s what I love about it. Science becomes art, and those two things mesh together really nicely.

Especially right now, I think it’s important to recognize where exclusivities are happening. There is sexism, racism. Seeing them brought to light is really heart wrenching and unfortunate.

We need to do a better job for women, people of color, and non-binary folks, for both the patrons and the brewing/designing side.

I feel like we have a really good community at 3rd Planet Brewing. Everyone is pretty cognizant of how we are choosing our words.

For instance, if there was ever a joke made about a ‘girly’ beer in the taproom, I’ve felt very lucky to be in an establishment that jumps on that. My male coworkers don’t put up with that crap.

We have a no-tolerance policy. We have a strong, informed team. We’re not as large as other commercial breweries, but that’s a plus for us because it’s a tight-knit community.

Science definitely came into play. So did water chemistry. Something people don’t think about often is multitasking, and staying organized. It’s a small example, but there is nothing worse when you can’t find scissors to open a bag of grain.

I’m pretty outgoing, and that’s benefitted me as well. I’ve been able to socialize with other brewers. Even through social media it’s been cool.

Cory King, the owner and brewer for Side Project Brewing in St. Louis, MO. He has such a passion for the ingredients and for the craft. He went from brewing as his literal side project, to making it happen. He really pushes the envelope for me.

That is hard. I will say, and will apologize because I can not remember the name. It was a coconut curry hefeweizen that New Belgium Brewery had done for their ‘lips of faith’ series.

It stood out to me because I was at a college at a beer fest, and really enjoyed it. This is the moment when I understood how far the envelope could be pushed when it comes to craft beer.

A lot of people we’ve been interviewing are late in the game. With your new perspective, what have you seen as a great challenge, when you break into the industry?

I think that a lot of people don’t necessarily understand the mechanics behind it. I’m pretty handy, but it comes in handy, no pun intended. If a solo node goes out, you need to know the tools you need, how to put it back together. I’m an electrician, I’m a plumber, I’m all these other things.

I thought about writing to craft beer professionals a lot. I’m very short, I’m about 5’1, 110 pounds, I can lift everything, I can do it all, but sometimes the struggle, or lifting a 50 bag of grain; it can get awkward and we don’t have scaffolding. I’m figuring out how to work smarter, not harder.

Are there people that you know, virtually or in-person, that you go to with questions?

Yeah, some of it is asking. There are not a lot of female brewers in my area, but a lot of it is communicating with them online. The brewing industry is exclusive, but kind and friendly in a lot of ways.

Other brewers are willing to jump in and help, and tell you how to do things. That’s something I always found to be a bit of a struggle.

See what Rachel is brewing at 3rd Planet Brewing here.