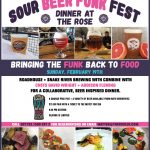 Rita and BjornThis past February, Snake River Brewing debuted a new concoction named the Peg-Leg Vanilla Porter brewed by our two newest brewers, Reed and Bjorn. The beer was an instant hit so we thought this would be a good opportunity to hear about these two new guys. Who are they? Why and how did they make a vanilla porter? And why the heck is it called peg-leg? It’s a good story, I promise…

Reed Sparks moved from Atlanta, Georgia to Jackson Hole in the 2012 in the hopes to find seasonal work at the Jackson Hole Mountain Resort and on the Snake River. I was lucky enough to meet him on a gondola ride that winter where he was sporting a questionable mustache on his first day of work as a lift operator. After a few years of various positions around town he found work at Snake River Brewing as a server. Through his work at the brewpub he discovered an interest in brewing craft beer. Reed ended up leaving Jackson to take a brewing course at Appalachian State University. He then relocated to Denver to work at Prost Brewing. Lucky for us, Reed eventually came back to SRB as a full time brewer in the spring of 2016. Reed is known at the pub for his happy demeanor, silly sense of humor and ability to befriend just about anyone. His nickname among the brewers is “Rita” because at one of the first brewer outings, he ordered a margarita instead of a beer! What a newbie.

Bjorn Arndt has long time ties to Snake River Brewing even though he was born and raised on the other side of the world in Hamilton, New Zealand. Bjorn’s parents and our longtime brewmaster and current Director of Operations, Chris Erickson, became friends while Bjorn’s parents were traveling around the United States in the 80’s. Over the years the Erickson’s and Arndt’s have remained close, which was perfect when Bjorn expressed interest in moving to the United States in 2015. He worked briefly in Park City as a snowmaker and then decided to relocate to Jackson, WY to work for SRB. Bjorn started front of house (just like Reed) and eventually impressed everyone so much with his hard work and good attitude that he was promoted to canning and brewing Summer 2016. (This promotion had nothing to do with his close family ties to the boss man… we do (not) support nepotism here…) Fun facts about Bjorn: he calls coolers “chilly bins”, he loves to eat smelly canned oysters while skiing and his kiwi accent always makes the ladies swoon.

Two big events happened in Summer 2016. First, both Rita and Bjorn were granted positions as brewers. Second, they both broke their legs within two weeks of each other. Bjorn’s story was pretty legitimate—he broke his leg while slalom water skiing on Jackson Lake. [And unfortunately he has had another accident (this time skiing) and has broken the same darned leg. So, back to the peg leg! And hopefully he will become more cautious in the future?] Rita’s accident was not quite as cool. He decided to steal a fellow co-worker and roommate’s bike (MINE) and ride over to the brewpub for beers during a rainstorm. He obviously broke his leg riding home in the dark later that night. As to be expected, head brewer Rudy Borrego was none to pleased that his new hires were basically useless during the busiest season of the year. That is when Rita took it upon himself to buy a peg-leg like device so they wouldn’t have to miss canning shifts. Throughout the summer Rita and Bjorn both had to work out a schedule so they could both use the peg-leg during each of their shifts. Not the best (or most sanitary) system, but it ended up working out in the end.

When Rita and Bjorn were told it was their turn to come up with a collaboration beer, they new immediately they wanted to make a Peg-Leg Porter. They decided to brew Vanilla Porter—the classic chocolate roasted flavor with a sweet Vanilla addition. The beer has been received by locals very positively and hopefully we will make it again next winter because it was delightful!
Cheers to you, Bjorn and Rita. Happy to have you both as the newest members of the team!