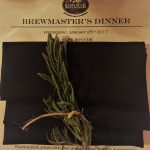 &nbsp Sour Beer Funk Fest this Sunday! For the first time ever Snake River Brewing is teaming up with Q. Roadhouse Brewing Co. and the Pink Garter Theater to put on a Sour Beer Funk Festival! There will be a FREE SOUR BEER TASTING starting at 5:30 pm at the Rose, with brewers from both breweries to talk about the beers and answer questions. The Rose will be pouring 5 sour beers from each brewery with a couple non-sour beers to round the tap list out. You will be able to purchase proper pours of all of the sour beers you can taste- while they last!

There will also be a Brewery Collaboration Dinner with the chefs of the Rose! Tickets are $75 for the dinner (or $90 for dinner + show). The menu looks amazing… you don’t want to miss this!

Beer Dinners are so fun!

After all that sour beer fun, there will be live music from the funk band, The Motet starting at 9:00 in the Pink Garter Theatre. Tickets for the show are $25 (or tickets for show + dinner are $90).  They are an American funk, afrobeat and jazz influenced group based in Denver, Colorado.

Come appease your sour cravings with your favorite local breweries!

OK… you need a little more inspiration? Below is a list of the sour beer that will be available for tasting.

From Snake River Brewing…
Le Serpent Cerise – A Flanders red ale, aged in chardonnay barrels for a year with sour bugs. This tart and refreshing beer has a wonderful fruit aroma from the organic Oregon cherries added to it in the barrel. A firm malt body comes thru with a slight flavor of chocolate which mixes well with the oak from the barrel. 7% ABV

Sour Panda – This Belgian Quadruple style ale is aged in pinot noir and syrah for a year. Lactobacillus and brettanomyces continue to ferment the big beer until it is sour and funky. Organic Oregon blackberries are added once the desired tartness is achieved. The maltiness of the original beer helps to balance the acidity. Strong flavors of red wine and berries and oak. 12% ABV

Electric Kool-Aid Berlinerweiss – Classic German sour wheat ale with a twist. This low gravity beer is first fermented with lactobacillus to create its sourness. Then a German ale yeast is added to finish it out. Grapefruit is thrown in to give it some extra zip.The wheat malt in this beer add to a bread aroma and flavor. The grapefruit addition creates a subtle citrus flavor and aroma. 4.5% ABV

This is going to be amazing. Come try all the beers, drink proper pours of your favorite hard to find local sour beers, chat with local brewers about the glory and science of sours beers, eat a fancy beer dinner and dance your face off afterwards!