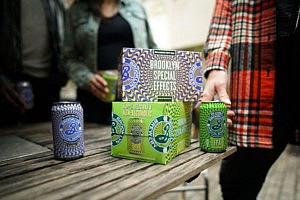 Brooklyn Brewery: can you speak to the growth of the non-alcoholic/alcohol-free segment globally and in the U.S. specifically? How have attitudes evolved towards the idea of alcohol free beverages?

Eric Ottaway: In the last few years on of the strongest performing segments of the global beer industry has been the non-alcoholic and alcohol-free segment. (Editor’s note: “non-alcoholic” is the general category in the United States, while Europe and many other countries tend to use “alcohol-free” due to slightly different labeling guidelines. The terms are used interchangeably here.) While in many parts of Europe alcohol-free beers now make up 5-10% of the market, the US still lags behind at under 1%. However, that has changed with the segment showing strong double digit— and in the case of craft non-alcoholics, triple digit— growth. That growth in the US is powered by both the increased availability of better tasting non-alcoholic brews, like our Special Effects, but also an increasing desire to find alcohol-free alternative to popular beverages for when the moment calls for a great-tasting beer without the buzz.

The longstanding barriers to non-alcoholic beverages, especially in the US, were around the perception that they were only for certain people who “don’t drink” alcohol. Non-alcoholic beer especially has always been marketed as “less than,” or tends to focus too much on the removal of alcohol. When we developed Special Effects, we were determined to show the consumer that alcohol-free beer doesn’t have to be about taking something away, but rather what a non-alcoholic beverage can add to the experience.

Garrett Oliver: I’ll say that as a brewer and a beer drinker, I was initially very skeptical of the non-alcoholic category itself and of the products on offer in the marketplace. I like and believe in the beauty of great alcoholic beverages. However, Special Effects posed an alluring technical challenge…could a non-alcoholic beer actually be delicious? And despite my misgivings, I have to say that I now drink Special Effects Hoppy Amber and Special Effects IPA regularly. They’re great with lunch! And now I realize that if a traditionalist brewer will sometimes drink an NA beer, so can everyone else. It’s a great thing to have on hand.

EO: In Europe Special Effects Hoppy Lager (as it is called outside the US) has taken off like a rocket, and in our second full year of distribution is up over 200%. In the US we’re still in our introductory year, and we are seeing strong month on month growth as well. Special Effects Hoppy Amber is consistently gaining distribution across the country and finding its way into drinkers’ lifestyles. The introduction of Special Effects IPA is only going to make NA beverages more desirable, seeing as it’s the most popular craft beer style in the world.

BB: What went into the decision to add an IPA to Brooklyn’s non-alcoholic lineup? What makes it unique?

EO: It’s no secret that IPA’s are by far the most dominant category in the craft beer industry. Naturally it makes sense that many people looking for non-alcoholic alternatives will look for options within the IPA style. Sticking with our belief that NA beverages are for everyone, it made the most sense to focus our attention on craft’s most popular style.

During its development, Special Effects IPA was held to the same quality standards as any other beer in the Brooklyn portfolio. It’s delicious and above all that, it’s fun! We’re very much here to say that alcohol-free beers can be just as fun.

GO: I think people will be glad to see that Special Effects IPA…tastes like IPA! What does that mean these days? In this case we’re a bit closer to the West Coast classic IPA profile, showing light-moderate body, good fruit, a nice hop bite, and a floral-citrus hop aroma.

BB: What foods would you pair with Special Effects IPA?

GO: Special Effects IPA works well with the same dishes that an alcoholic IPA would. First to mind are often-spicy cuisines such as Thai, Indian, Szechuan Chines, and some Mexican dishes. It’s also a good choice for any situation that calls for the cutting power of hop bitterness, whether it’s barbecue or just some robust cheese.

BB: Where will Special Effects IPA be available, and when?

EO: Special Effects IPA is shipping across the U.S. now, as is Special Effects Hoppy Amber. They can be found in on- and off-premise retailers where Brooklyn Brewery is sold, for direct purchase from our Online Store, fine stores including Whole Foods and Total Wine, and our own Tasting Room. International rollout will follow in 2021, so stay tuned for more news there.

BB: How do you make Special Effects IPA?

GO: We use a special fermentation method that develops the flavors, aromas, and character of beer while keeping the alcohol before 0.5%, and then use both hops and natural hop-derived oils to create lively citrus notes and a clean finish.

What’s next for the Special Effects lineup?

EO: We’re already playing with other ideas, but on the back of the success of Bel Air Sour, we may tee up a sour non-alcoholic next. Who knows though?! There are a number of fun directions we can go. What’s important is that we’re creating more moments for more people to interact with craft beer— the presence of alcohol no longer has to be a barrier on any given occasion.