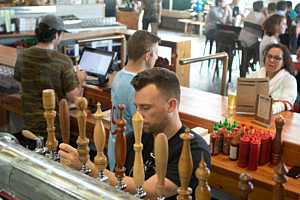 Frank pouring himself a frothy lager at the brewpub

If you’ve visited Aslan in the past year, you’ve noticed an increase in the number of lagers on our menu. While ales will always hold a soft spot in Aslan’s heart, our staff has been really digging the brews coming out of our lager program. About a month ago we had over five different lagers on draft at the Brewpub! That number dwindled as we started running out of lager, partially from staff drinking our own supply, but it remains a key focus for our brewery.

This shift into making high-quality lager was by design. Frank Trosset, Head Brewer and an Owner of Aslan Brewing, has been obsessed with brewing and drinking lager beer for the past few years. We sat down with Frank to learn more about lager beer and it’s future as Aslan Brewing Co.

Andy: Let’s start with the basics; how would you describe the difference between lager brewing and ale brewing?

Lager brewing equipment at Pivovar Nymburk in the Czech Republic

Frank: The difference between ale and lager brewing is similar to the difference between speed skating and figure skating. The goal of speed skating is to move around the ice as fast as possible. The goal figure skating, on the other hand, is more focused on technique and presentation. Both are fine, and there’s nothing wrong with either of them, but they are two totally different mentalities.

What it comes down to is that lager is a much more difficult beer to make. It requires a lot more patience, an appreciation of history, and an understanding of nuance and restraint. In a large part craft beer in the US today is known for being unbalanced and over the top, but lager beer isn’t like that.

If you are making really well-made lager beer, you are geeking out about the most specific details: what is the PH you are targeting at specific points in the mash to optimize enzymes, how much yeast are you pitching, how much oxygen are you allowing to come in contact with the wort. While in ale brewing mistakes can be hidden, those same mistakes become profoundly understood on the palate with lager brewing. You have to be perfect throughout the whole brewing process, including an intense concentration in wort production, fermentation, and cellaring, filtration, and packaging.

Andy: What do you like about the flavor and taste of lagers compared to ales?

I think Helles is the perfect beer because you can drink it all day long. There’s a ton of flavor, but you have to let your tongue open up to it. With an IPA, the flavor can explode on your tongue like a firecracker. It doesn’t work that way with properly made lagers; you have to search for it.

Andy: You’ve recently traveled to Bavaria and the Czech Republic, how was that experience?

Frank: It felt like the sleepwalking scene in Donnie Darko when he is in the wormhole. I wasn’t trying to achieve anything in particular on the trip. I just knew I had to go there and see how they are making beer. It was amazing to see how breweries there have been making beer for hundreds of years, what’s not beautiful about that!

What is most important about theses trips is the perspective that they cast. Anyone can get a pitch of lager yeast from their bank and make a lager, but there is much more that goes into really making lager. You can discover some bits of knowledge from German brewers, but most of what they do they keep a secret. These secrets can be uncovered over time if you know what to look for. My trips to Bavaria and the Czech Republic helped me to start understanding this and galvanize my approach to lager bier.

Andy: What would you say the key is to making excellent lager beer?

Frank: It is understanding the history of beer and the brewing process while applying modern technology. We need to do it in a way that is mindful of the artisan element of beer, which you can still find in small non-industrialized breweries in Germany. We fortunately don’t have to cut corners like industrial beer to save time and cost.It comes down to repetition. Perfecting the slightest nuance takes a long time, and a lot of careful attention to detail. Also putting wheat in a lager. Just gonna say that we will never do that.

Andy: What’s the best lager you’ve ever had?

Frank: One of the most profound beer-drinking experiences I’ve had was in the cellars of Pilsner Urquell. A long time ago they used to ferment all of their lagers in open-top wooden tanks underground. When the beer was at near terminal gravity, they would transfer it into closed wooden casks further underground — due to the void of artificial refrigeration/suitable metal for brewing. As the world advanced, these ancient practices went away. Most would agree that the modernization of the world has helped create better beer, among other things.

However, some things get lost along the way. If you visit the city of Pilsn and go to Pilsner Urquell, you can see this old practice still in use. Drinking a lager, that is not infected, out of a wooden tank, fully carbonated, unpasteurized and unfiltered, while in a cave that’s hundreds of years old is the pinnacle of beer drinking. At that moment, I knew I had to replicate what I was experiencing — I just gotta figure out how to get a cave built under the brewery haha!

Andy: What’s been your favorite lager you’ve brewed so far in terms of process?

Frank: The Czech lagers we have done because of their authenticity. A lot of breweries will call their Pilsener a Bohemian because it’s not German enough, but I’ve yet to come across a craft Pale lager in our region that would pass in the Czech Republic as “Bohemian”. A different process is required to create the distinct flavor of Czech lager.

I’m also particularly proud of Tateyama. Doing a real cereal mash with whole rice was hard, but a lot of fun.

Andy: What’s been your favorite lager you’ve brewed so far in terms of taste?

Frank: That’s tough, but again both Czech pale lagers and our most recent batches of Helles and Tateyama. The latter two had a really cool cola note hidden in them. It’s these small nuances in fermentation technique that drives so much complexity in a pale lager. These flavors won’t jump out; you have to find them.

Andy: What has lager brewing taught you about ale brewing?

Frank: Patience, intense appreciation for tradition, and how important a clean brewery is. Ask anyone of my brewers, and they’ll tell you that the brewery can never be clean enough. You can taste a dirty brewery in its beer. You can’t taste a clean brewery, because it’s clean. Maybe that is the taste?

Andy: For someone that only drinks ales, how would you convince them to give lagers a chance?

Frank: Oh man, I’m not sure I’d want to convince them. I honestly like that most people don’t get all worked up about a well-made lager. However, if you want to expand your palate, lager is a great way to do it!

Andy: Anything final thoughts on lagers?

Frank: Super stoked to see that we got recognized for our attention to detail in our lager program by getting invited to be one of the eight breweries invited to be part of the Bitburger challenge. Looking forward to being in Portland this weekend!