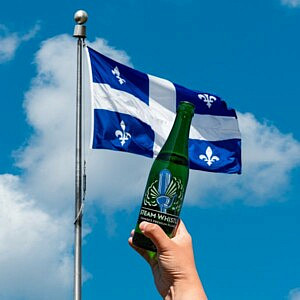 “Steam Whistle has steadily been growing its distribution across Canada, but until now we have made limited inroads in Quebec. We are excited about the opportunity to work with the amazing team at Les Brasseurs du Nord, bringing further strength to our national alliance of highly regarded brewers who value quality beer, responsibility to the planet, and commitment to our communities,” says Greg Taylor, Co-founder and CEO of Steam Whistle.

Gregoire Watier, Steam Whistle’s Director of Sales Quebec & Western Canada, adds, “working in collaboration with Boreale gives us the opportunity to have Canada’s Premium Beer available in a large network of retailers across Quebec. There is a lot of enthusiasm for Steam Whistle Pilsner in the province and Boreale will help us greatly in making sure people can get their hands on it.”

“Steam Whistle is a pioneer of the craft beer movement in Canada, and we’re excited to partner with them in La Belle Province. It will be our privilege to introduce Canada’s premium pilsner to a larger audience in the Quebec market as we work to increase trial and awareness for this iconic brewery. It’s always fun to work with friends who share the same passion around common values and that’s the partnership that we have with Steam Whistle,” says Sébastien Paradis CEO of Les Brasseurs du Nord.

The next stage of this new partnership could see Steam Whistle reciprocating the distribution of select Boreale products outside of Quebec. The future is bright for these compatriot brewers.

Les Brasseurs du Nord was brewed in a kitchen in 1987. Three beer enthusiasts made it their mission to create an original, pure malt, all-natural beer. One year later, they created Québec’s first red ale, Boréale Rousse. Les Brasseurs du Nord is today a 100% Québec-owned microbrewery located in Blainville in the Lower Laurentians.  The brewery has been recognized for 35 years for its all-natural beers under its Boréale brand. In 2016, the new “Artisan Series” line was launched, with beers such as Double Blanche du Lac, ISA des Chutes, and Scotch Ale du Nord, and new creations such as Pilsner des Mers and Pale Ale des Bois. Furthermore, The Micro-Brewery has been offering an extensive line of non-alcoholic beers under the name ‘’Hors Sentiers’’ which complements their regular lineup.

The Micro-brewer’s Episode program also features creative and limited beers. This program resulted in the Nord-Est IPA, which was recognized by Ratebeer 2019 as the best IPA in the world.