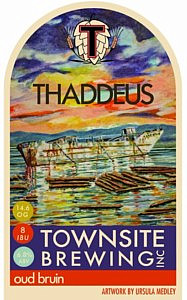 A lacto starter gone awry, a new manoeuvre we call ‘the black sparge’, a fermentation left in the barrel room and forgotten.
These are the ingredients that came together to make the beer we call Thaddeus.

A collaboration last fall with our friends at Gladstone Brewing called for a lactobacillus starter, a sour black Saison was to be made. The morning after pitching lacto into 20 ish Litres of wort Scott and Cédric came in to find a vigorous fermentation happening, a sign that wild yeast had gotten in and taken over.  Instead of dumping and restarting, Scott put that 20L in the barrel room to see what would happen. A couple of months later when they revisited that vessel, a strong flavour of stone fruits (think cherries, plums) was detected and Scott and Cedric decided to investigate these flavours.

A turbid mash was concocted with a dash of midnight wheat at the end of sparge, as Cédric is so wont to do these days, and into this was pitched our wild -yeast- lacto- starter. A new age version of the Oud Bruin style becomes a classic Townsite brew.

This is our sixth HULK release, a series of beers named for the concrete ships that make up the breakwater of the Powell River paper mill. It comes in bottle conditioned format only and is very limited in quantity.

On the horizon- we have received our first Foeder, all the way from Italy. Her name is Beatrix Foeder.  Cedric & Scott have big plans for her. Watch.this.space. Posted in Townsite Brewing.