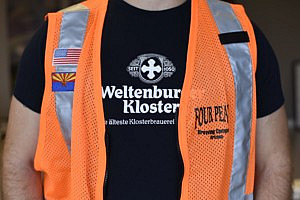 For years, we’ve partnered with Tempe Sister Cities to bring a little bit of Germany to Arizona in the form of the Four Peaks Oktoberfest at Tempe Town Lake. But for this year’s celebration of all things Deutsch, we wanted to go further.

The Weltenburg Abbey. Picturesque, no? The beer we made is a weizenbock, a German-style ale brewed with wheat; think of it as a stronger, heavier version of hefeweizen. Based on one of Weltenburger’s oldest recipes, the beer has a spicy, complex flavor full of banana, baked bread and stone fruit. It adheres to the Reinheitsgebot (the old Bavarian purity law that says the only four ingredients allowed in beer are malt, water, hops and yeast) and, we believe, could be the beginning of a brilliant tradition of partnership between Four Peaks and Weltenburger. That’s why we named the beer “Freundschaft,” the German word for “friendship.”

Freundschaft will debut Tuesday, October 9 at our pubs and will be available at select retailers in Tempe shortly after. It will also, of course, be flowing at the Four Peaks Oktoberfest, which runs October 12-14. See you there, freunde.