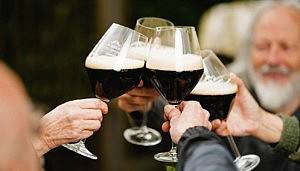 Why do you like drinking Cuvée du Château? "It’s pleasantly sweet for a heavy dark beer", some will say. Others will reply, “I truly enjoy its exclusive flavour." “A beer to be enjoyed to the full!”, is another enthusiastic reaction. When we put that same question to Hans Mehuys and Stijn Van Laere, Master Brewers at Kasteel Brouwerij Vanhonsebrouck, we get an answer that is entirely in line with the reactions of consumers. Time for a good chat about this unique speciality beer!

Hans Mehuys and Stijn Van Laere take a seat in the elegant tasting area, right next to the Beer Boutique. “This is where you can taste our specialty beers after a visit to the brewery. Our guide also takes the time to answer any questions our visitors may have or to share some fun facts,” says Hans while Stijn puts a bottle of Kasteel Donker on the table.

Hans takes the bottle and looks at the label, which says “Brewed in 2011”. That’s exactly ten years ago. He opens the bottle and pours 2 glasses. Hans makes the beer swirl around in the glass like you do with a glass of wine.

“When the well-known beer sommelier Ben Vinken first tasted our Cuvée du Château, he immediately made the comparison with wine. If you were to compare beers with wines, Cuvée du Château would be somewhat like a Burgundy or a strong Médoc” , Stijn says.

The Master Brewers taste the beer. The flavour palette is characterised by notes of madeira and port. “About twelve years ago, I was strolling through the cellars of Ingelmunster Castle with Xavier Vanhonsebrouck, now the fifth generation of our family brewery. This castle inspired the late Luc Vanhonsebrouck to brew Kasteel Donker. In the cellars, we found bottles of Kasteel Donker that had been maturing for about ten years. We opened a bottle and were presented with this fantastic palette of flavours. That immediately made me curious for more!”

When Xavier and Hans tasted the ten-year-old Kasteel Donker, the CEO was already toying with the idea of brewing a gastronomic beer. “Back in 2009, specialty beers had started to become more and more popular in gastronomy. A legendary beer brand like Kasteelbier simply had to jump on the bandwagon,” Hans explains.

And so it did. Once they had tasted the old Kasteel Donker, Xavier and his Master Brewer set to work on the new beer. “For our Cuvée du Château we use the same ingredients as for Kasteel Donker,” says Stijn, grabbing a bottle of Cuvée du Château. He explains that the special brewing process gives the beer its unique port-like taste. What exactly is the secret? “That secret remains with the brewer”,the Master Brewer answers with a wink while he pours two glasses.

Hans and Stijn taste the beer again. It is immediately apparent that the Cuvée du Château is less sweet than the Kasteel Donker. With 11 degrees of alcohol, the Cuvée remains a special beer that you should take your time for. “Our CEO once recorded that he could intensely enjoy a glass of Cuvée du Château after a day’s work. And I think he is not alone. It gives you a moment to put everything in perspective,” says Hans.

“With a glass of Cuvée in your hands, you feel like a king. We want to give everyone that lush feeling.

At table with Cuvée

After the tasting, the duo heads to the Beer Boutique. The other Kasteel beers, including Kasteel Rouge and Kasteel Tripel, are neatly displayed next to other specialty beers like Filou, Brigand and Bacchus. “Stijn, would you like a beer praline?” Hans is standing in front of the refrigerated counter where the famous beer pralines of Kasteel Brouwerij Vanhonsebrouck are displayed. “Now we have to taste one with a filling of Cuvée du Château,” laughs Stijn.

Before they go back to the tasting area, Stijn grabs the book ‘Bierstronomie’. He flips through the book to the chapter about the family brewery from Izegem and shows Hans the recipe for rabbit à la Flamande. “Prepared with Cuvée du Château, a heavenly combination!”

Hans also shares a few food-pairing tips: “I can’t even imagine a game season anymore without Cuvée du Château. Furthermore, our tasting beer goes well with organ meats, lamb ragout and cheeses with a lot of body and flavour.”

King of the Castle

In 2010 Xavier Vanhonsebrouck had a single goal: to brew a gastronomic beer. And with this Kasteelbier he definitely succeeded. “holding a glass of Cuvée in your hands, you feel like a king. We want to give everyone that lush feeling”, Stijn concludes.

Wonder who you will crown as King of the Castle with a Cuvée du Château!

Fry the mushrooms, bacon and pearl onions together in a large, low casserole pan. Once they have turned golden brown, take them out of the casserole pan.

Then fry the rabbit in the butter in the same pan until lightly brown. Add the bacon, mushrooms and pearl onions, and pour in the chilled Cuvée du Château. Make sure all the ingredients are covered with the beer.

Add the bay leaf and juniper berries, and simmer for about 45 minutes. Once the rabbit is cooked, remove all the ingredients from the pot and thicken the sauce. Season the sauce with salt and pepper, and add the wholegrain mustard and a dash of vinegar to taste.