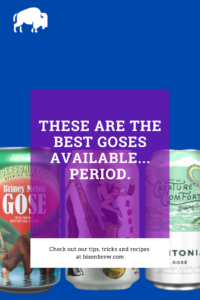 Sour, salty, and lemony – gose sounds more like a sports drink than a beer. Refreshing and thirst-quenching, why not have a couple after some hard work to cool off? Better yet, gose pairs perfectly well with a relaxing summer day – no sweat!

Gose is a traditional German top-fermented wheat beer brewed with coriander seed. The beer’s salty character is what makes it unique. Brewers add salt to give gose a complex blend of flavors that results in a super refreshing and quaffable beer.

This historic style has recently seen a sharp rise in popularity thanks to craft breweries producing modern examples of gose. We explore this eccentric style and list our ten favorites. We hope to inspire you to check out this diverse and exciting beer.

What Is A Gose?Simply put, gose is a sour wheat beer brewed with coriander seed and salt. Usually between 4-5% ABV, very pale in color, and highly carbonated, the seemingly bizarre mix of flavors works surprisingly well. Gose shares many characteristics with Berliner weisse, but gose is normally less acidic. Most importantly, the salinity and citrusy coriander set gose distinctly apart.

The style originates in the 10th century in Goslar, Germany. The high salt content in the local water supply added a natural salinity to the region’s beer. Open fermented, natural lactobacillus soured the beer, creating a pleasant lemony tartness. To accentuate this lactic citrus note, coriander seed was added to the boil, giving a herbal touch and roundness.

Through the years, the style grew in popularity and found a new home in larger Leipzig, Germany. There, it was brewed with added salt rather than from the local source water. Gose breweries were booming through the 19th and early 20th centuries but were largely all destroyed during World War II. Never recovering to it’s prior glory, the style’s popularity waned and nearly died completely.

In the 1990s, however, interest in gose slowly started to re-build. When Gosebrauerei Bayerisher Bahnhof opened in 2000 in Leipzig, gose was brought back into the mainstream. This set the stage for the style’s resurgence in Germany and abroad.

Modern interpretations of the style range from strictly traditional to overtly eccentric. Since gose is a unique flavor profile to begin with, creative brewers play around with it, adding fruits and flavorings to set their beers apart.

What Makes A Gose Good?Gose is probably the most refreshing and satiating style of beer. Sure, pilsner can quench a mean thirst on a hot day – but a gose’s salty, sour taste and very light body make it exceptionally quaffable. Refreshing drinks made with salt are actually very common. Think of Gatorade, margaritas, or micheladas. The saltiness dries out the finish and keeps you wanting more, sip after sip.

The best gose beers are perfectly balanced between the acid, sweetness, and salinity. Pushed too far in any particular direction, the beer loses its essential drinkability. Too much salt, it tastes like sea water. A heavy handed coriander addition is reminiscent of a ball-park hot dog. And too sour, the flavors get consumed by biting acidity.

Here are ten of the world’s best gose beers. These beers are all brewed to be refreshing, light, and most of all, delicious.

As is traditional in Leipzig, this gose is unfiltered and brewed with a good dose of coriander seed – imparting a distinct lemon fruitiness. Balanced with a pronounced salinity, Bayerischer Bahnhof has been keeping their city’s beer heritage alive since 2000.

Briney Melon Gose, Anderson Valley Brewing CompanyAnderson Valley’s original gose was the “gateway gose” for many American craft beer drinkers. Their first gose was a great example of the style which stuck to a traditional recipe. After that initial success, they were inspired to brew more versions and add their own Califnorian touch to the style.

Briney Melon Gose is brewed with watermelon for a thirst quenching and cooling take on the German classic. The watermelon and salt combination works incredibly well – think of the Italian antipasto, prosciutto and melon. Candied watermelon rind and citrus qualities give this beer a pleasant sweetness. Balanced and fresh, the slight hint of coriander seed adds a subtle layer of earthiness and citrus.

Rosé Gosé, Hoof Hearted BrewingInspired by rosé wine, and always game for a little word-play, Hoof Hearted created Rosé Gosé, a bright pink and juicy gose. At 5% ABV, their gose is brimming with flavor from the additions of pink Himalayan salt, coriander, and hibiscus flowers.

Salty, juicy, and effervescent, Rosé Gosé takes a classic gose base and adds a massive punch of complexity from the naturally tart hibiscus. These pink flowers lend a complex floral and berry-like character. After a few sips, you’ll be seeing the world through rosé-colored glasses.

Tritonia With Cucumber & Lime, Creature Comforts Brewing Co.Creature Comforts may have discovered the perfect beer to highlight cucumber flavor. Using the salinity of gose, the freshness of the cuke is retained while the lime adds bright zesty fruitiness. The citrus touch also prevents any pickle-like weirdness from taking away any of the drinkability.

Tritonia is the brewery’s rotating line of gose beers. The cucumber and lime variant really sets itself apart as one of the country’s best examples of the style. The hallmark salinity and coriander flavor of gose are amplified by these unique, summertime flavors. Refreshing, easy drinking, and packed with flavor, this beer’s best enjoyed under the hot sun.

Never Again, The Veil Brewing Co.The Veil’s astronomic rise to the upper echelon of craft breweries has been incredible. Through savvy use of social media and amazing branding, their releases are always full of hype. Luckily for their loyal fan base, the beers are always outstanding. Focusing on hazy IPA and fruited sours, The Veil are specialists in juicy, saturated beers.

Never Again is a 4.9% ABV gose brewed with Himalayan salt, coriander, and lots of raspberries. Pouring a deep cloudy pink, this beer starts off with massive raspberry juiciness, amplified by the lactic sourness. Salt rounds everything out and leaves you with a nice drying finish.

Pouring a cloudy yellow, fragrant lime fizzes out of the glass. Notes of lemon and lime are highlighted by a balanced salinity and herbaceous finish. A light body lets this beer go down easy and the low 4.2% ABV leaves some room to have a few. The sour profile is reserved and fitting, making Suburban Beverage the ideal beer to bring to a backyard barbecue or pool party.

Original Ritterguts Gose, Ritterguts GoseRitterguts Gose claims to be the oldest existing gose brand in the world. Brewed at Brauerei Reichenbrand, a small family brewery in Chemnitz, it’s been produced the same way since 1824. Open fermentation provides an estery and fruity character. A long maturation with lactobacillus contributes to a clean and rounded tartness.

Drinking Ritterguts Gose transports you back to a different era. Its crisp and clean profile is accentuated by the herbal and lemony punch of the coriander. The salinity carries through the finish, helping to keep this traditional ale super refreshing.

Gose, Westbrook Brewing Co.Classic, balanced, and clean, Westbrook’s Gose is the modern gold-standard for a textbook gose. The South Carolina brewery makes this exceptional ale to keep cool under the hot Southern sun.

Brewed with lots of wheat for a nice and fluffy body, grey sea salt and coriander seed give this gose a perfectly balanced, quaffable finish. Flavors of funky lemongrass and fresh cracked wheat bounce off the tongue. Highly carbonated and extra crispy, Westbrook has nailed the style with this elegant rendition.

Troublesome, Off Color BrewingTroublesome is a blended gose, meaning that two separate batches of unique beer are mixed together to the brewmaster’s taste. They start with a wheat beer brewed with lots of fragrant coriander. Blended with this, at about 20%, is a sour beer fermented solely with lactobacillus. Blending helps the brewers at Off Color maintain a consistent quality, batch after batch. While blending, they also add a small amount of salt to give their gose the classic touch.

Off Color are known to use experimental brewing practices on their quest to brew outstanding and unique beer. Troublesome is a well-crafted and delicious take on the traditional German gose and it is well worth the trouble seeking out a bottle or two!

Gose, Lost Nation BrewingLost Nation’s Gose is a straightforward and delicious interpretation. As one of the early American gose brewers, Lost Nation were brewing a mix of interesting and up and coming styles. Also pioneers in the NEIPA movement, and clustered in with so many great Vermont brewers, they released their Gose in 2013. This then-obscure style instantly set them apart from the rest.

Pouring a pretty opaque yellow, this gose has subdued acidity and a high level of coriander kick. Flavorful and light, Lost Nation’s take on this style is crushable and an unbeatable companion to a hot day on the lake in the Green Mountain state.

Frequently Asked QuestionsHow do you pronounce gose?German pronunciation can be tricky. If you want to pronounce this style properly, you should say it like “Goze-Uh”. Two syllables. But don’t worry if you get it wrong when you order a tasty gose – any embarrassment will be soon forgotten after one sip of this sour and salty slammer.

Are “gose” and “gueuze” the same thing?No, these two similar sounding words are completely different beer styles. They’re both sour beers, but that’s where their similarities end.

Gueuze is a spontaneously fermented blended lambic beer from the Senne Valley in Belgium. The name “gueuze” is likely taken from Geuzen Street, in Brussels, where a lambic brewery once stood.

Gose is a sour German wheat beer brewed with coriander and salt. The name is derived from the river Gose that flows through the town of Goslar, whose water was used at the original gose breweries.