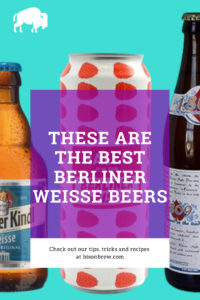 Finding the ultimate refreshing craft beer can sometimes be a challenge. Strong, bitter, or just plain obscure, craft beer can often be reserved for tasting sessions. These days, many craft brewers seek the fine balance between artisanal product and drinkability. Berliner Weisse is a style that craft breweries have recently focused on to produce beers with this perfect harmony.

Berliner Weisse is a traditional sour wheat beer originating in Berlin, Germany. The style, once almost extinct, has gone through a rebirth thanks to a rekindled interest in historical beer styles in America and abroad. Both traditional German beers, as well as modern American takes, hold a significant place in the growing sour beer market.

We’ll take you through what to look for in a Berliner Weisse and list our favorite examples. From stylistically traditional, to fun and experimental, Berliner Weisse comes in many forms.

Berliner Weisse was a widely popular style in Berlin. In fact, the story goes, that as Napoleon crossed Europe in the early 19th century, his troops consumed copious amounts of Berliner Weisse. They deemed it the “Champagne of the North” alluding to it’s quaffing drinkability and high effervescence.

Style SpecificsBerliner Weisse is traditionally brewed with a blend of lactobacillus, Brettanomyces, and saccharomyces. Sour and funky flavors derived from the fermentation are the traditional hallmarks of the style. Modern interpretations often omit the brett, instead going for a very clean, lemony lactic-sourness.

Wheat and pilsner malt are the most common malts. Berliner Weisse should be slightly cloudy and very pale. Imagine a pilsner beer with a slight haze. This bright profile gives Berliner Weisse its requisite crispness and adds to its drinkability.

If you happen to be in Berlin, your bartender may ask you what syrup you’d like with your Berliner Weisse. Woodruff or raspberry are the usual options. Don’t be shy to try – the flavor combinations are actually delicious – but be sure to taste it straight as well.

American breweries tend to build innovative and flavor-packed interpretations of Berliner Weisse. Adding fruit, lactose, and dry hops are all commonplace and, while not traditional, make delicious beer.

Kettle Soured or Traditional?Breweries are split between their methods in crafting Berliner Weisse. On one side, you have the kettle-soured proponents. On the other, you’ve got the traditionalists.

Kettle souring allows for a quick turn-around and eliminates a brewery’s concern for cross-contamination. Souring bacteria need a special cleaning procedure, so some brewers prefer the kettle sour technique to lower this risk. Most American breweries use this technique for brewing Berliner Weisse as it’s fast, simple, and consistent.

The traditional brewing method is to co-ferment with lactobacillus and yeast to make a more expressive flavor profile. This takes longer and requires dedicated sour beer fermenters. On top of that, the addition of Brettanomyces during secondary fermentation can also add to the beer’s complexity.

What Makes A Berliner Weisse Good?First and foremost, Berliner Weisse is defined by its lactic sourness. If you’re used to drinking sour beer, this style should be slightly less sour than a gueuze, but not as funky or vinous. Berliner Weisse is light, crisp, and refreshing. Oakiness, tannins, or acetic flavors are not to style, nor desirable.

Sour beer takes time, patience, and craft to brew properly. Berliner Weisse is no different. The differentiator, however, is the importance of drinkability and a light, refreshing body. Lemony tartness must be present, but if too sour, the beer becomes harder to drink. Balance and subtlety are the keys to this style.

A great Berliner Weisse should be complex but straightforward, acidic but infinitely drinkable. They need to be malty but dry, refreshing, and light. Hop flavors are almost non-existent and should only be used to provide a small amount of bitterness.

Funk and Brettanomyces derived flavors are not required in modern Berliner Weisse. Of course, if you’re a fan of funk, seek out traditional interpretations brewed with brett. Too much brett can throw a Berliner Weisse off balance, however. This can detract from its inherent thirst-quenching character. Great funky Berliners are balanced, light, and fresh tasting.

Like most sour beer styles, fruit additions are an obvious compliment. As is the tradition in Berlin, Berliner Weisse is often served with flavored syrup. American brewers take fruit additions to another level, adding fruit at each stage of the brewing process. With such a clean sour and light base, Berliner Weisse is an amazing base beer to experiment with fruity flavors.

Because of the lactic acid combined with the very light body, Berliner Weisse doesn’t typically have lasting head retention. Don’t worry if you see your beer’s foam dissipate quickly. The popping carbonation will more than make up for the beer’s perception when it bounces against your lips and nose.

Here’s our picks for the best examples of Berliner Weisse available today.

Marlene is brewed with a mix of wheat and pilsner malt for a light body. It’s then fermented with a blend of saccharomyces, Brettanomyces, and lactobacillus. This 3% ABV, glowing pale brew is slightly acidic with a subdued funkiness from the Brettanomyces. A refreshing beer for a hot summer’s day which pays tribute to the tradition of Berliner brewing.

Schneeeule even scavenges Brettanomyces from old bottles of Berliner Weisse from defunct breweries. For the most traditional interpretation of the style, seek out Marlene and enjoy this nod to breweries’ past.

1809 Berliner Style Weisse, Professor Fritz BriemProfessor Fritz Briem makes curious, small-batch historical brews at his Munich brewery. As an instructor at the renowned Weihenstephan Institute, his knowledge in historical brewing is vast. On top of that, he’s an expert on lactobacillus fermentation. His ode to traditional Berliner Weisse, 1809, is a complex and rustic beer.

Brewed with 50% wheat malt and open-fermented, 1809 is soured with lactobacillus. The result is a 5% ABV Berliner Weisse with a substantial body, mouthfeel, and bursting with character. Cloudy and highly carbonated, this traditional Berliner Weisse is delicious, historic, and refreshing.

Though not exactly a traditional product anymore, Berliner Kindl Weisse is widely consumed in Berlin. It’s often the only Berliner Weisse option available at bars. The hallmarks of the style are present – lemony, lactic, and refreshing. It’s a great beer to consume on a hot day in a Berlin Biergarten. Best enjoyed with a hot bratwurst and a pretzel.

Key Lime Pi, Westbrook Brewing Cosource: westbrookbrewing.comWestbrook’s Mexican Cake stout was one of the world’s first “pastry stouts” – a style that would eventually take over the craft beer world. Because of this, it’s not unexpected to see them brew with such a unique adjunct – actual key lime pie.

Released each year on Pi Day – March 14th – Key Lime Pi starts off with a modest Berliner Weisse style base beer. To this, key lime pies and lactose are added, turning this beer into liquid dessert. Keeping the ABV at 5%, however, maintains a light body that is not overly cloying. This beer’s not only drinkable, but absolutely delicious, nostalgic, and fun.

Ich Bin Berliner Weisse Raspberry, MikkellerRaspberries are one of the most popular fruits used in sour brewing. The natural tartness combined with the juicy freshness of the berry blends perfectly with the Berliner Weisse base.

The Danish beer empire makes a few versions of Ich Bin Berliner Weisse, some are definitely better than others. The best one, though, is the raspberry iteration. Smooth and easy to drink, this enticing 3.7% ABV tart wheat beer pours a deep ruby red and pairs exceptionally well with a hot summer day.

Daily Serving: Mixed Berry, Trillium Brewing Co.source: trilliumbrewing.comTrillium’s known for their genre-defining New England IPAs since their beginnings in Boston in 2013. With the expansion of their enterprise, their range of beers have grown as well – with the same exceptional quality we’ve come to expect. The sour beer program at Trillium consistently releases impressive and complex offerings.

Galaxy Pop!, Grimm Artisanal Alessource: grimmales.comGrimm Artisanal Ales started gypsy brewing in 2013. After gaining a following for their unique styles, owners Joe and Lauren Grimm opened their own brewery in Brooklyn in 2018. Always willing to push style boundaries, their Pop! series of flavored Berliner Weisse toe the line between beer and soda, being both complex yet fun and drinkable.

Galaxy Pop! is a Berliner Weisse style ale dry-hopped with Galaxy hops and brewed with vanilla and lactose. The result is a tart, creamy, and fruity beer with a full and luxurious body. Galaxy hops provide an intense tropical flavor that’s propped up by the dessert-like mix of lactose and vanilla. Galaxy Pop! is a loose interpretation of Berliner Weisse showcasing this American brewery’s creativity.

Cranberry, being tart and juicy, is a fantastic compliment to Berliner Weisse. Jack’s Abby takes their expertly crafted sour base and thoughtfully adds the perfect amount of cranberries. The result is a light pink, slightly hazy, beautiful sour beer that pairs with Thanksgiving dinner just as well as a day at the pool.

Athena, Creature Comforts Brewing Co.source: creaturecomfortsbeer.comA classic, yet modern, interpretation of Berliner Weisse from Georgia’s best, Creature Comforts Brewing Co. Athena pours a pale blonde with a nice fluffy head. At 4.5% ABV, it has a bit more body than a typical Berliner Weisse but remains dry and crisp for that expected drinkability.

Athena is a superb beer on its own, but they also offer a fruited version. Creature Comforts Athena Paradiso takes the base of Athena and adds copious amounts of passion fruit and guava. Tropical, juicy, and candy-like, the Paradiso variant is a worthy companion to Athena.

Frequently Asked QuestionsBerliner Weisse seems open to interpretation. Why?Berliner Weisse is a very simple style. Wheat, pilsner malt, and lactobacillus are used to brew a very pale and sour beer. From this base, modern interpretations are nearly endless. Bending style guidelines seems to be the norm in brewing Berliner Weisse these days. Fruit, hops, herbs, and even pastries, have all been used to create unique and interesting flavors from the base of standard Berliner Weisse.

Aside from within Germany, enforcement of the trade law protecting the name is rare, however. And outside of Europe, the directive has no legal bearing. Out of respect for tradition, many breweries will use terms like “Berliner-style Weisse” or “Berlin-style wheat ale”.

Many breweries ignore or are unaware of the protected name and that’s why there are so many beers called Berliner Weisse on the market.