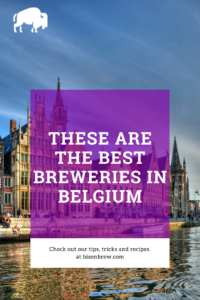 Belgium is a small country in Western Europe known for its beer. The beer savvy population and dedication to tradition make beer the overwhelming beverage of choice. Belgian brewers’ pursuit of excellence has kept the beloved little country at the pinnacle of brewing for centuries.

Throughout Belgium, regional breweries dominate consumer loyalty. In Brussels, you’ll see locals sipping on their trente-trois of Zinnebier by Brasserie De La Senne. In Bruges, on the other hand, thirsty customers order Brugse Zot by the pintje. Across Wallonia, small artisanal breweries line the extravagant beer lists of the many vibrant cafes.

Brasserie DupontIn the tiny village of Tourpes, Brasserie Dupont has been a working farm-brewery since 1950. With a focus on flavorful, expressive beers, Dupont is dedicated to Belgian brewing tradition. Alongside their genre-defining Saison Dupont, they have a delicious range of farmhouse ales. From special releases to everyday classics, Dupont brews consistent and high quality beer.

Moinette is their most popular brand within the borders of Belgium. Coming in either a Brune or a Blonde, the pair is brewed with the famous Dupont yeast, but with higher ABV than the Saison, each at 8.5%. Both beers exhibit expressive, estery, and spicy yeast characteristics. The Blonde is crisp, bright and refreshing. The Brune is warm and comforting, with notes of dark fruit and brown sugar.

For over 100 years, Cantillon has been brewing traditional lambic from their small Brussels brewery. The family-run brewery has seen the ups and downs of the beer industry over this time. In fact, lambic beer almost died out in the mid 20th century due to lack of demand. Luckily for beer lovers, Cantillon withstood these perilous times and are stronger and more popular than ever.

Today, Cantillon boasts an impressive lineup of regular and seasonal beer. Their classic Gueuze, which is a blend of barrel aged 1, 2, and 3 year old lambic, is the style’s benchmark. Foufoune, made with 18 to 20 month old lambic and blended with copious amounts of Bergeron apricots, is one of the world’s most popular sour beers.

A pilgrimage to their historic Brussels brewery is a must for every beer lover. Casually stroll through their original brewhouse, including a massive copper coolship room. Take a deep breath and inhale the famous Senne valley air. It’s a unique experience and should be at the top of your craft beer bucket-list.

In the small town of Esen in West Flanders, De Dolle have crafted their own unique style since 1980. When De Dolle took over and restored an old, derelict brewery, the people of Esen rejoiced. Their first beer release – Oerbier – a unique take on Belgian Dubbel, is still their flagship and most popular.

Along with Oerbier, De Dolle brews a selection of eccentric and flavorful ales. Arabier, a bright, rustic, and hoppy Belgian Strong Pale Ale, is brimming with flavors of pear, citrus, and spice. In contrast to Oerbier, it’s lighter and sessionable – however, beware of its deceptive 8% ABV.

De Dolle Brouwers – Dutch for Mad (or Crazy) Brewers – live up to their name. A visit to their convivial old brewery is captivating and a deep-dive into Belgian beer culture. Pull up to the bar and try a freshly poured glass of Oerbier, soak in the kitschy vibe, and enjoy one of the finest beers in the world.

Orval only publicly sells one beer. Still though, this legendary Trappist brewery is undoubtedly one of the world’s greatest. It’s a pillar in the Belgian beer universe for its uniqueness and consistency. Orval is one of those timeless beers loved by both craft beer geeks and mainstream drinkers.

Young, it’s brightly floral from a large Styrian Golding dry hop. Malty without being overly sweet, the rich ruby colored body has a pillowy mouthfeel, with a long, dry finish. As the beer ages, brettanomyces – added at bottling – starts to evolve the flavors into classic rustic funkiness.

A visit to Orval is worth the windy, scenic drive. Nestled in the south-east corner of Belgium, the Abbey is peaceful and meditative. Although you can’t visit the brewery itself, the Abbey and beautiful ancient runes can be leisurely explored. It’s a serene place to contemplate the intricacies of Belgian brewing history.

As a bonus, L’Ange Gardien, the Abbey’s cafe, serves up traditional Belgian food and a special, light version of Orval beer. Simply called Orval Vert, this draft only 4.5% session beer is bursting with fresh hoppiness. Think of it as a delicious paired-down version of the original that you can’t get anywhere else.

First brewing in 1994 under contract at a small West Flemish brewery, De Ranke has always focused on expressive hop-forward beers. In 2005, they opened their own brewery after years of growing their name throughout Belgium and abroad.

XX Bitter, a hoppy Belgain Pale Ale, is one of the country’s finest examples of the style. More bitter and floral than others in the category, their flagship pale ale is remarkably crisp. Fine carbonation floats a wispy, meringue-like foam that pushes the intense hop aroma through with each sip.

Belgium’s six Trappist breweries all make outstanding beer. Orval, as mentioned, is the most unique brewery of the Trappists. Chimay, however, may be the most prolific. With a brewing history dating back to 1862 and a sophisticated range of impressive beer, their products can be found around the globe.

Chimay Grand Reserve – referred to simply as Chimay Blue – is a Belgian Strong Dark Ale. For 9% ABV, it’s soft, balanced, and heavenly. Pouring a dark mahogany with a dense beige head, layers of dark fruit, port, and brown sugar waft from the glass. A sweet, smooth, and dangerously drinkable body makes this beer an all-time classic.

On the lighter side, Chimay White is a perfectly brewed, sweet, hoppy, and balanced Tripel. Bursting with carbonation, this 8% ABV blonde beer shows off delicious banana esters and spicy Trappist yeast. This harmonizes elegantly with the finest pale malts and subtle noble hops.

3 Fonteinen has a storied history making exceptional blended lambic dating back to the late 19th century. The business has changed hands a few times, but has always maintained a commitment to delicious, hand-blended lambic beer. In 1953, the blendery was purchased by Gaston Debelder, who became the architect of the 3 Fonteinen brand adored by millions today.

Armand, Gaston’s son, eventually took over as master blender and manager at 3 Fonteinen. He oversaw a massive expansion, including the addition of an on-site brewery and coolship. Armand grew 3 Fonteinen into one of the most important beer brands in Belgium.

Though ownership has recently changed yet again, the new owners are committed to the same quality and quest for excellence. A pure testament to the craft of lambic beer, their Cuvee Armand Gaston is a flawless Gueuze that carries the name of the father-son duo. This special lambic is expertly blended, with lambic produced only at 3 Fonteinen. Bright funky citrus mixes with a balanced acidity, making for one of the world’s best Gueuze – or sour beers in general.

Brussels, the biggest city and capital of Belgium, was once the country’s brewing hub. Through the 20th century, the rise of industrial brewing forced smaller, city breweries to shutter. Combined with the devastation caused by both world wars, Brussels effectively became a city devoid of breweries. For years, until 2010, Cantillon had been the only active brewery in the city.

That changed when Brasserie De La Senne opened their small brewery in the Molenbeek neighborhood of the city. They quickly won the hearts of locals with their unique, bitter brewing style, with a focus on hop and yeast expression.

Taras Boulba is a shining example of De La Senne’s eye for balance and drinkability. At 4.5% ABV, this hoppy table beer is loaded with herbaceous hop flavor. Very pale in color, but with ample body and mouthfeel, Taras Boulba is a thirst quenching brew best enjoyed in a cozy Brussels cafe.

Belgian tradition with an American craft brewery mindset – that’s how De Struise rose to the top of many “best of” lists throughout the craft beer boom. Since 2003, they’ve consistently brewed some of the world’s finest stouts, quadruples, and strong ales.

De Struise has garnered an international reputation for their rare and revered limited releases. One of their most sought after beers, Black Albert, is a viscous and decadent 13% ABV Imperial Stout. It’s over the top, with a sticky and sweet, vinous complexity. Pitch black and topped with a creamy beige head, a slight acidity and alcohol warmth linger on the finish.

Other special releases, like their Black Damnation series, were some of the original craft hype beers. They continue to be cherished amongst old school Imperial Stout beer geeks, and represent some of the finest barrel aged stouts in the world.

Brewing modern interpretations of traditional Belgian beers, Antidoot has a naturalist approach. The flat, green fields of Flanders inspire the distinctive beers brewed by co-founders and brothers Tom and Wim Jacobs. This creative duo utilize wild yeast and traditional techniques to craft unique and beautiful ales with a sense of terroir.

Their small production certainly adds to the mystique of Antidoot’s releases. Each beer is thoughtfully brewed, often using local hops, herbs, or fruit.

Artemisia Absinthium is a barrel aged sour ale, bittered with dried wormwood flowers from the brewery’s garden. The acidity balances effortlessly with a firm herbal bitterness. This blonde beer has the refreshing drinkability of an IPA, but the complexity of aged lambic.