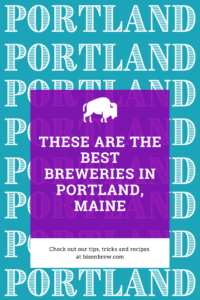 Known as Vacationland, Maine is a great place to visit for its amazing nature, beautiful beaches, and historic towns. The state’s biggest city, Portland, should be considered Beercationland for craft beer lovers.

Portland, Maine has one of the most vibrant craft beer scenes in America. The quality and diversity of amazing breweries make Portland a must-visit for beer lovers. From the influential craft beer giants, Allagash, to newcomers like Bunker, Portland has some of the best breweries in the world.

Allagash White is the beer that garnered them nationwide attention. And while it’s delicious in its own right, their range of wild, sour, and funky beers is what set them apart. Leading the way in American spontaneous fermentation, they have a range of wild beers made using their coolship – one of the first in the U.S.

Allagash are committed to quality, while respecting tradition, and are a brewery that every Portlander can take pride in.

Bissell Brothers Brewing CompanyThe best IPA brewery in Maine, and arguably all of New England, Bissell Brothers are trendsetters and a genre defining brewery. Their growth occurred during the rise of New England IPA and they were at the forefront of the style’s beginnings. On top of their world-class IPAs, they brew a range of delicious lagers and stouts.

The Substance Ale is their flagship beer – a unique IPA that’s dank, juicy, and insanely drinkable. Simply put, it’s one of the best beers in the world and to top it off, it’s brewed using 75% Maine-grown grain

If you have time to spare, consider taking a drive to Bissell Brothers Three Rivers. This is their newly built mixed-fermentation brewery in Milo, Maine making incredible sours and saisons.

Foundation’s story, like many Maine breweries before them, started at 1 Industrial Way. Steps from the Allagash brewery, 1 Industrial Way has housed several of Maine’s top breweries over the years. Foundation chooses to keep a limited production, staying in their original tiny industrial space.

Try out Epiphany, their dank, resinous, and citrusy IPA. It’s full bodied and smooth while maintaining a delicious malt profile with a fruity finish.

Austin Street BreweryAnother brewery born out of 1 Industrial Way, Austin Street has moved production to their Fox Street location, still in Portland. Their original location now serves as a blending and bottling plant, with a small tasting room. Their unique perspective on brewing has set them apart in the Portland scene. They continue crafting a range of hoppy beers without shying away from experimentation

Patina Pale Ale is a wonderful, straightforward, and easy drinking beer. Very hoppy, but with a balanced drinkability, this is the pale ale everyone wants in their fridge at all times.

Oxbow Blending & BottlingOxbow Brewing is based in Newcastle, Maine, about an hour drive north of Portland. Luckily for Portlanders, Oxbow opened up a barrel house right in the middle of the city of Portland.

At this trendy out-post, Oxbow created a farmhouse atmosphere where they bottle a range of their beers and also offer a large tasting room. Here you can try many beers from their Newcastle brewery as well as the beers blended on-site.

Try out their classic Farmhouse Pale Ale for a funky, hoppy, balanced delight. If you’re lucky, they’ll have the Barrel-Aged FPA – taking their flagship Saison to complex and vinous new heights.

Maine Beer Co.Before the New England IPA craze, Maine Beer Co. was making ridiculously hoppy beers with a soft mouthfeel and restrained bitterness. Different from their West Coast counterparts, Maine Beer Co. put a strong emphasis on hopping in the whirlpool and fermenter. Their strict quality control and the use of only the finest hops contributed to their rapid growth and respect in the American craft beer scene.

Located just a few miles north of Portland, Freeport is a quaint New England town most notable for the L.L.Bean store and headquarters. Tasting Maine Beer’s Peeper Pale Ale directly from the source is worth the drive alone. Intensely fragrant and fruity, this 5.5% pale ale showcases the freshest American hops.

Oh-J, their Imperial IPA, is a perfectly executed, juicy, tropical, haze-bomb. Layers of soft and juicy fruit sit atop a lusciously rich mouthfeel.

If you happen to be over in Gorham, Maine, be sure to visit their satellite tasting room.

Although their beer flies off the shelves, Bunker chooses to brew the slow way. Allowing their lagers the needed time to smooth out and condition. Their barrel aged stouts are similarly long-aged, giving them months to mellow and absorb the intricacies of the barrels.

On top of their hazy IPAs, they also put out some nice seasonal beers like Lutro, their salted lemon gose. Super fresh and tangy, a perfect accompaniment for a hot day at one of Maine’s sandy beaches.

There’s always something new to try, but their regular beers are definitely worth revisiting. Ume Gose, a gose brewed with fresh plum and house-made umeboshi (salted plums and shisho), is salty and sour, with rounded complexity.

Frequently Asked QuestionsWhat are the best beer bars in Portland, Maine?Almost all of the breweries we listed have an on-site tasting room or full on bar. We highly recommend you check out these breweries directly from the source for the freshest beer and amazing experience.

For bars, Portland certainly has no shortage. The best craft beer bars in Portland, Maine are Novare Res Bier Café, Mash Tun, The Great Lost Bear, and The Thirsty Pig.

How do I get to Portland, Maine?Portland has an international airport, the Portland International Jetport, just miles from downtown. Being a relatively small city, downtown Portland is easy to access from all modes of transport.

If you’re doing an East Coast road trip, Portland is only 100 miles north of Boston along the I-95. It’s definitely worth the visit for the craft breweries, great food, beautiful scenery, and amazing people.