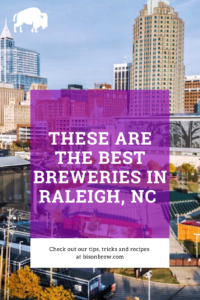 North Carolina has more than 320 craft breweries, making it the premier destination for beer in the South. Most craft beer enthusiasts flock to Asheville for its otherworldly selection of breweries. But Raleigh, the state’s capital, is slowly building a name for itself nationwide with many innovative breweries.

This is our list for the must-try breweries in Raleigh, NC. Find the perfect beer to go along with the world-famous North Carolina barbecue on your next trip to the City of Oaks.

Brewery BhavanaBoth a brewery and convivial kitchen, Brewery Bhavana brews up some inspired and innovative beer. With a focus on Belgian beer, though not limiting themselves to any particular genre, Bhavana is a Raleigh hot-spot. Beer lovers can take advantage of the relaxed and chic atmosphere while tasting their wide range of elegant beers.

One of their best beers is called Holy Spokes, a smoked porter with cinnamon, habanero peppers,vanilla bean, and cocoa nibs. Nailing a spicy beer is a challenge, but Crank Arm deliver with this culinary blend of comforting flavors. Habanero heat is balanced with smooth vanilla and chocolate notes, with a subtle cinnamon spice that rounds out the beer. A true standout in an already solid lineup of great tasting beers.

Lynnwood Brewing ConcernFor a classic American craft brewery experience, Lynnwood’s got you covered. They’ve got pun-filled beer names, like their tasty Czech Yourself pilsner, along with a classic American pub and grill menu. But dad-jokes and Americana aside, they brew some very well-crafted beers.

Lynnwood’s core beers are all tasty, but their best – and probably most popular – is Hop On Top. This modern take on American IPA is classically bitter but fruity and soft. Also nice is their rotating selection of seasonal brews, like Oatmeal Stout in the late fall to early winter.

Trophy Brewing & TaproomTrophy has grown into a Raleigh craft beer juggernaut. Now with three locations across the city, you can experience their flavorful beverages in a number of atmospheres. Their production brewery on Maywood Avenue has a beautiful taproom that’s a haven for beer geeks.

Flagship session IPA, Trophy Wife, is brimming with hoppy goodness despite it’s svelte 4.9% ABV. Bright, crisp, and refreshing, this little IPA is a go-to for locals.

Big Boss Brewing CompanyBrewing hoppy IPA and clean lagers since 2006, Big Boss is a staple in the Raleigh craft beer scene. Not only are the beers well-brewed, their taproom is expansive and welcoming. It’s definitely a great spot to spend the day sampling their numerous draft beers.

Big Boss Lager is their delectable German Helles inspired lager. 5% ABV, clear blonde, and bursting with complex bready maltiness, this lager is the best in the city. Light toasted malt flavors round out the finish, balanced by subtly spicy European hops. A great session beer for a hot Carolina day.

Neuse River Brewing & BrasserieFocused mainly on Belgian style beer, Neuse River is a brewery and restaurant with a decidedly European vibe. A nice range of Belgian beer is complimented by a fusion Belgian-Carolinian food menu.

With a rotating selection of beer, you can always expect something experimental and new. You can’t go wrong sampling one of their Belgian-style beers like the Rainkeeper’s Wit, a classic Belgian witbier. They also make a few hoppy American styles which are always soft, juicy, and great quality.

Raleigh Brewing CompanyOpening in 2013, Raleigh Brewing Company has grown into a local favorite. Its central location and inviting space make for a great meeting place. On top of that, a diverse selection of great beer keeps the regular beer geeks more than satisfied with 32 taps continuously flowing.

Their core range is brewed on a modern 30 barrel system, keeping a steady supply of beers like The First Squeeze, a blood orange American Wheat Ale. A smaller 3 barrel brewhouse pumps out seasonal batches like Oktoberfest Lager, a delicious and malty Marzen.

Little City Jalapeno/Serrano Ale is a pale ale with citrusy Centennial and Cascade hops. This is layered with light spiciness from both jalapeno and serrano peppers. Slightly spicy, earthy, and bright from the hops, this beer is a great aperitif to excite the palate. Follow that with their Koldbrew Kölsch, a German style blonde ale brewed with coffee. Curiously balanced between roast and clean malt, it’s surprisingly quaffable sip after sip.

Funguys BrewingFunguys are the local hazy IPA purveyors for the craft beer lovers of Raleigh. Keeping production tiny, they’re able to focus on NEIPA, hazy pale ale, and all things juicy. Fruited sours and pastry stouts are also in their repertoire, but they’re at their best brewing hazy hop bombs.

The classic NEIPA hop combination of Citra and Galaxy are uniquely showcased in The Spectrum, Funguys’ triple IPA. At 9.5%, the juicy and dank hops are balanced with a full and malty body. Notes of papaya, zesty citrus, and mango hide any hotness from the alcohol, creating a satisfying indulgence.

Bond Brothers Beer CompanyThe only brewery outside of Raleigh proper to make our list, Bond Brothers – in nearby Cary – is a must-visit. Known for their range of barrel aged sours, stouts, and IPAs, their taproom is also a great place to hang out with a relaxed and chill vibe.

Their imperial stouts are always luscious and decadent. Breakfast Variant is a 10.5% ABV, complex, and delicious stout brewed with oats, coffee, and cocoa nibs. On the lighter side, try their IPA called Obfuscate. It’s nicely balanced between juicy and resinous hops, with a soft malt backbone. One of the best in the state.