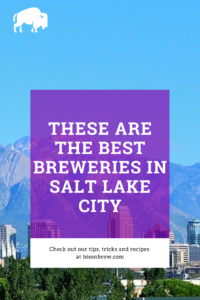 Craft beer in Utah is starting to thrive. With 32 breweries and counting, the state is slowly moving away from its teetotaler past and allowing craft breweries to flourish. The capital, Salt Lake City, is the craft beer hub leading the charge.

Drinking craft beer in Salt Lake City is a unique and interesting experience. From the nationally acclaimed Epic Brewing, to the brand new brewpub Bewilder, a diverse range of styles can be found throughout the city. If it’s your first time going to Utah, you should know they have some antiquated liquor laws stemming from the days of prohibition. Strong beer – defined as anything over 5% alcohol by volume (ABV) – can only be sold in bottles or cans. That means you won’t be drinking any draft beer over 5% ABV.

For fans of session strength beer, you will love the endless options available in Salt Lake City. And if you need a strong beer, most breweries offer their complete range in bottles or cans for on-site consumption or to take away.

Here’s our picks for the can’t miss breweries in SLC. The way the industry is headed in the state, we hope to see even more amazing breweries in the near future.Epic Brewing Company

Utah’s first strong beer brewery since prohibition, Epic Brewing Company has been around since 2009. Against the grain since their inception, this brewery has never shied away from pushing the boundaries.

Epic’s diverse lineup certainly lives up to its name. From session beers, to light lagers, IPAs, and barrel aged stouts, they have a far reaching and impressive range of styles. Garnering nationwide success with their extreme lineup of imperial stouts, Epic is Utah’s most talked about brewery across the U.S.

Legends in the Salt Lake beer scene, Uinta was founded in 1993 brewing on an ambitious 15 barrel system. Throughout the years, they’ve kept up with the changing landscape of craft beer in America. These days, they produce a very solid range of core beers, like their Hop Nosh IPA – a classic West Coast IPA – or their refreshing gose, Ready Set Gose.

On top of the great mix of accessible ales and lagers, Uinta’s Belgian inspired, mixed-fermentation beers are definitely some of the best in Utah. Croggy, their Brett saison, is delicately hopped with Mosaic. The juicy hop profile mingles nicely with the tropical funk from the Brett and saison yeast.

Quality and tradition forms the core of Templin Family Brewing’s ethos toward beer. With a focus on German lager, they’re committed to taking the time and effort in crafting exceptional products. Long, cold conditioning rounds out their range of tasty traditional lagers. Or if you’re in the mood for something hoppy, they have several excellent, modern IPAs.

Lager geeks will love the assortment of often-overlooked styles like Dortmunder and Kellerbier. Templin Family’s München Helles is a standout – malty, crisp, with just enough subtle hop aroma to keep it balanced. An absolute delicious and refreshing take on a Bavarian classic.

Employee-owned and community-oriented, A. Fisher Brewing company offers a wide selection of draft beer – meaning all of it’s 5% and under. Enjoy these sessionable beers on their patio paired with a rotating selection of local food truck options.

Most of their releases are top-notch, but if you have to try only one, go for the Rye Cream Ale. Surprisingly complex, this very refreshing and full bodied cream ale has subtle hoppiness backed by smooth and spicy rye malt.

Toasted Barrel is a must-visit for sour beer lovers. Their unique interpretations of classic European sour beer – from Berliner Weisse to Oud Bruin – set them apart in the Utah beer scene. On top of that, they offer up a crowd-pleasing range of hazy IPA, oak aged lagers, and barrel aged stouts.

One of their core beers, called Raspberry Weisse Man, is a kettle soured wheat ale aged on lots of tart and juicy raspberries. Sour, crisp, and refreshing, this tasty Berliner Weisse is flawlessly executed and a great entry into their creative range of beers.

Uncompromising and innovative, SaltFire Brewing Co. makes a modern selection of well-brewed beers. Focussing on flavorful and drinkable ales since 2016, they mainly stick to American styles. Now and then, they’re known to experiment with saisons, wild ales, and sour beer with very delicious results.

Dirty Chai Stout is one of their most unique and flavorful beers. Adding Indian Chai to a rich and roasty coffee stout creates a spicy and comforting brew. At 6.7% ABV, it’s not overly cloying or sweet, with a great balance of smooth, sweet malt and pleasant bitterness from the coffee and hops.

Bewilder is the type of brewery every beer-geek dreams to have in their city. Delicious beer, a great tasting kitchen, and a relaxed vibe. This downtown brewpub puts an emphasis on brewing traditional styles with a modern and personal touch. Seasonal brews, paired with their Bavarian-inspired food menu, make Bewilder Brewing a must-visit in Salt Lake City.

Try whatever seasonal is freshly tapped. Their German and English styles are great, as well as their hazy IPA. For an awesome take on a classic English bitter, the Bewilder ESB is malty, hoppy, and delicately balanced, making a perfect session beer.

Located in the Granary District, Kiitos brews a massive array of styles – many of which are available in cans. For the rest, you can head to their cozy taproom to taste their impressive range.

Northeast India Pale Ale, their take on a hazy IPA, is one of the best in the state. Pouring a bright but hazy orange, it opens up with lots of classic tropical hoppiness. The soft mouthfeel and low bitterness let the juicy flavors shine without being overly sweet.

Yes, Utah breweries can sell cans and bottles directly from their brewery. This goes for any strength, above or below 5% ABV.Can you get strong beer on tap from breweries in Salt Lake City?

No, breweries who wish to serve beer over 5% from their taproom sell either bottles or cans. Most breweries offer draft beers 5% ABV and less, with a selection of bottles for anything stronger.