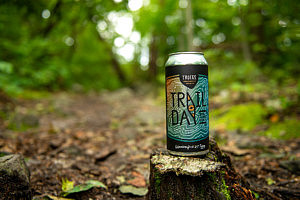 A portion of proceeds from Trail Day dry-hopped pilsner to support purchase of land critical to clean water, rich forests and safe migratory passageThe Nature Conservancy and Tröegs Independent Brewing are once again joining together to protect Pennsylvania’s Kittatinny Ridge, an ecologically important 185-mile chain of forested Appalachian mountains that runs through Pennsylvania.

Today, Tröegs is releasing a limited run of a dry-hopped pilsner called Trail Day. A portion of proceeds from the beer will go toward the Tröegs Trail Day Fund. The fund will help protect 15,000 acres of the most critical, connected lands on and next to the ridge – from the Mason-Dixon Line into New York state through the Delaware Water Gap. The goal is to ensure that songbirds, hawks, eagles, bears and even plants can travel as they must, and that nature will continue to provide clean streams, rich forests, recreational trails and biological diversity.

Starting with a backbone of German pilsner malt, this refreshing pils is dry-hopped with mildly citrusy and earthy Saaz hops. As fermentation slows, we reintroduce fresh lager yeast, conditioning the beer and delivering crisp and clean notes of biscuit, dried spice and a hint of citrus.

The beer will be available throughout Pennsylvania, Maryland, Delaware, New Jersey, D.C. and parts of New York.

Protecting the Kittatinny Ridge is a priority for The Nature Conservancy in Pennsylvania. This forested corridor allows wildlife to move throughout the ridge and has been identified as the most resilient landscape in the state for adapting to a changing climate. Working with local, state and federal partners, TNC is working to conserve more than 8,000 acres over the next three years.

“We grew up in the shadow of the Kittatinny Ridge and it passes within 10 miles of the brewery,” says Tröegs founding brother Chris Trogner, “so we know this land well. And few things are more important to brewing beer than clean water. We’re proud to be working with The Nature Conservancy to help protect a place that does so much for Pennsylvania and beyond.”

“We’re thrilled to work together with Tröegs to protect the Kittatinny Ridge, one of the most beautiful and important landscapes in all of Pennsylvania,” said Lori Brennan, Executive Director of The Nature Conservancy in Pennsylvania and Delaware. “The Kittatinny provides critical habitat for countless species of plants and animals, as well as amazing opportunities for people to get outside and experience nature. It’s imperative that we protect this priceless natural resource for future generations.”

About Troegs Independent Brewing
Founded in Pennsylvania in 1996 by brothers John and Chris Trogner, Tröegs Independent Brewing is driven by a sense of adventure and curiosity. From the beginning, the brewery has been built by family, friends and kindred spirits who share a love of great beer. Troegs is widely known for award-winning beers like Perpetual IPA, Troegenator, Nugget Nectar and Mad Elf, as well as the experimental Scratch Series, wood-aged Splinter Series and Hop Cycle seasonals. Tröegs started working in earnest with local ingredients back in 2002 with the debut of holiday favorite Mad Elf. Today, the brewery buys about 25,000 pounds of local honey every year. Tröegs also sources local produce including pumpkins, cherries, peaches, nectarines and strawberries from the fertile Fruit Belt of Pennsylvania, and this year the brewery sourced 100,000 pounds of Pennsylvania-grown barley for its new LolliHop Double IPA and Field Study IPA.