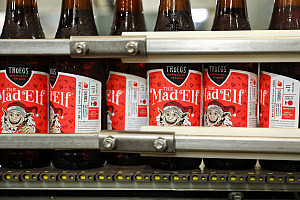 Mad Elf is here, and this year he has a festive new look.

Mad Elf’s new art – created in collaboration with Florida illustrator Joshua Noom – is the fourth iteration since 2002. The art takes cues from the past while moving him mischievously into the future.

“We have a history of reimagining the Elf,” says Tröegs brother Chris Trogner. “Mad Elf is a beer that really captures the holidays for so many people. And not just beer lovers. A lot of people who don’t regularly drink beer have a special connection with Mad Elf. This new art really captures what people love about it – it’s festive, nostalgic, and a whole lot of fun.”

Noom is no stranger to Tröegs. He was also the artist behind the new look of Troegenator, which we launched in early 2021.

“When it came to reimagining Mad Elf, there was definitely some pressure,” says Noom. “But working with the Tröegs team again was great. We wanted an Elf that was friendly, fun and welcoming. I like to picture him walking around the brewery, and he knows everybody’s name. I’m really happy with how it turned out, and I hope Mad Elf fans love it, too.”

The essence of this once-a-year holiday ale, along with its ruby red glow, is born from five varieties of tree-ripened cherries. Bing, Lambert, Van and Royal contribute a bright and juicy sweetness, and Montmorency adds a touch of tartness.

Local wildflower honey sweetens the celebration. Every year, when it’s time to brew Mad Elf, we source 25,000 pounds of honey from a neighbor in Carlisle, PA, called The Happy Beekeeper.

“When you taste honey, you’re getting a slice of nature,” says the beekeeper’s daughter. “And it’s best to get that pure, local source.”

We taste: cherries, local honey, chocolate malt, subtle spices.“We like to say that it’s not the holidays until you’ve had your first Mad Elf,” says Tröegs brewmaster John Trogner.

Mad Elf releases today in 12-oz. bottles and cans in Pennsylvania, New Jersey and Delaware. Look for it everywhere else Tröegs is sold in the following weeks, and keep an eye out for draft in November.

And as the holidays approach, Mad Elf is just the beginning. The variety and depth we offer fit the season like a cable-knit glove. Perpetual IPA, Troegenator, Blizzard of Hops, Mad Elf Grand Cru, Blood Orange Cranberry Tart Ale, DreamWeaver Wheat … there’s really something for everyone.

To find Mad Elf and all of your other Tröegs favorites near you, pop your ZIP code into troegs.com/brewfinder.