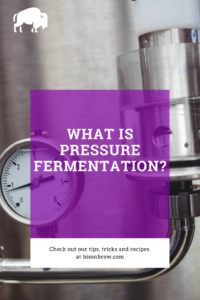 As beer ferments, yeast converts sugar to ethanol (alcohol) and carbon dioxide (CO2). Most brewers allow the CO2 to escape from the fermenting vessel. If you trap the gas inside the fermenter, this is called fermenting under pressure.

As fermentation progresses, CO2 continues to be produced and the internal pressure builds. Eventually, the beer absorbs all of the gas and becomes carbonated.

The level of pressurization depends on the rating of the fermenter, temperature, as well as the beer style, and the desired end result. Fermenting under different pressures can have specific effects on certain beers.

Ales are more sensitive to pressure and start to experience yeast growth problems at elevated pressures. Keeping the pressure lower will allow most ale yeasts to ferment cleanly, quickly, and attenuate fully. For hoppy ales, like IPA, pressure fermentation is said to retain more hop flavor. Instead of being removed by CO2 production, all of the delicate hop oils remain in the beer.

German TraditionGerman brewers use pressure fermentation to carbonate their beers. Because of the Reinheitsgebot, Germany’s beer purity law, brewers are prohibited from adding CO2 to their beer. Instead, most beers are naturally carbonated in large pressurized tanks.

Benefits of fermenting under pressurePressure fermentation has many benefits. Creative brewers continue to experiment and find new ways in which beers can improve under pressure.

Suppression of undesired flavorsFermentation is a complex reaction which generates many byproducts. By pressurizing fermentation, the creation of many of these byproducts is suppressed. This is especially beneficial to limit ester production. Esters produce fruity aromas and flavors in beer. For many beer styles, especially lagers, these fruit-forward flavors are undesirable. On top of esters, diacetyl – that buttery-slick characteristic – is suppressed under pressure.

Save on CO2If you keg your beer, you know there’s nothing worse than running out of CO2 when it comes time to carbonate. By fermenting under pressure, beer can be fully carbonated in the fermenter – completely naturally!

Better hop flavorWhen brewing hoppy beer, the goal is to highlight all of those delicious volatile hop oils. During fermentation and CO2 production, hop oils are driven off as the gas escapes the fermenter. Capping the fermentation and fermenting under pressure keeps hop oils in the beer for maximum aroma and flavor.

Smaller krausenBeer fermented under pressure does not produce a large krasen, the foam on top of fermenting beer. Because of this, less headspace is required in the fermenter. This is great if you want to brew a bit larger volume. Or, you can use a smaller fermenter and not worry about a messy or explosive fermentation.

Downsides of pressure fermentationStressed yeastYeast can become stressed under pressure, leading to unhealthy fermentations. Under-attenuation can be a result of lower yeast growth due to increased fermentation pressure.

Certain yeast flavor components are desired for some stylesEsters are a desirable flavor in many styles, like hefeweizen, witbier, and even IPA. Suppressing the production of esters can remove that fruity aspect from the finished beer.

Dry hopping considerationsDry hopping into pressurized beer can cause a “dry hop volcano”. Adding hops to carbonated beer causes the CO2 to quickly come out of suspicion due to the nucleation points by the hop matter. This can cause a burst of beer – almost like adding mentos to cola.

CostSpecially designed fermentation vessels are required to safely ferment under pressure. On top of the fermenter itself, transfer tubing, fittings, and external CO2 are all required for pressure fermentation.

How can I ferment my homebrew under pressure ?Most importantly, you need to have a fermenter that is designed to be used under pressure. This is absolutely necessary. Do not attempt to pressure ferment unless you have a specifically designed and pressure rated fermenter.

At the moment, there are many commercial options available. As interest in pressure fermentation grows, companies will be releasing new pressure fermenters. If you’re on a budget, we highly recommend the FermZilla. Spike, Ss Brewtech, and Blichmann all have high-end stainless steel options that make great pressure fermenters, as well.

For a DIY option, you can safely ferment in typical 5 gallon corny kegs. Since they’re rated for up to 60 PSI, they make a great, affordable pressure fermenter.

If you would like to brew crisp, clean lagers, but don’t have the time or required temperature control, consider pressure fermenting. For hoppy beers, try out fermenting under pressure to preserve all those dank and juicy volatile hop oils.

Always make sure your fermentation vessel is rated to handle the pressures you wish to ferment at.

At what point should I put the beer under pressure?Most lager yeasts can be fermented under pressure from the very beginning. Suppressing ester formation from the start will help keep lager beers clean. With ale yeasts, however, a pressurized fermentation can suppress desirable esters. Ale fermentations can start with an airlock and finish under pressure. This allows for ester production but also speeds up the fermentation at the end.