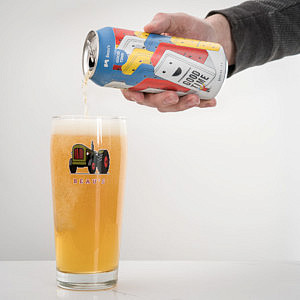 Beau’s Brewing Co. is releasing a brand-new, very limited release gruit ale this week. Called Tikkatee Gruit, the certified organic blonde ale is brewed with chaga mushroom and bog myrtle in lieu of hops. Both ingredients were locally foraged by hand from the wild, producing just two batches of this rare gruit. It will be sold in Ontario in select LCBO stores and on tap at a small number of craft-friendly restaurants and pubs, as well as a handful of beer-specialty retailers across Canada.

In gruit ales, herbs, spices and other botanicals replace a dominant hop character. While many of Beau’s gruits employ bog myrtle due to its helpfulness as a natural preservative for beer, this is the first beer Brewmaster Matthew O’Hara has brewed with chaga. “The bog myrtle imparts a herbal and peppery essence, and the chaga I found added complementary earthiness and some tea-like character. I used Vermont ale yeast which created some apricot fruit notes too. The complexity altogether is really intriguing.” O’Hara recommends service in a goblet at 6-8 C.

Tikkatee Gruit pours deep hazy gold with a quickly dissipating white foam. The aroma is predominantly herbal with a hint of bubblegum and cinnamon. The flavour is sweet and slightly peppery; the finish mildly tannic and dry. It is 6% ABV and of course, zero IBUs since it is made without hops. (While the label lists “hop” as an ingredient, it refers to the single pellet added strictly to meet the definition of beer.) The name for the beer comes from a Finnish “woodpecker tea” made from chaga mushroom, which inspired the label art concept.

Tikkatee Gruit will be sold in 600 ml bottles this spring, while supplies last.