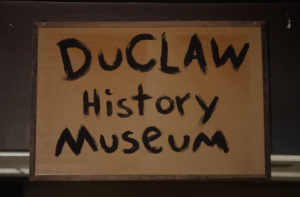 As DuClaw celebrates 25 years of beers, we wanted to take a little walk down memory lane. Founder, Dave Benfield, took us through the archives of the [almost famous] DuClaw History Museum* to show us some of the relics of our past.

Check out the video below for the full museum tour and keep reading for some more details about each exhibit.

Before he even set foot on a college campus, Dave was expected to go into the family business of electrical contracting. However, when Dave and his college roommates began homebrewing in their junior year, it became apparent that Dave would not be following in his father’s footsteps.

Devil’s Milk is best served in a snifter to accommodate the ABV and allow the complex flavors to emerge as the brew warms in your hands.

DuClaw Brewing Company began as a Bel Air brewpub in 1996. In order to serve alcohol at the time, DuClaw had to be a restaurant where 50% of sales came from food. Legally called a brewpub, DuClaw got its start as a restaurant with a brewery inside.

And as you can see, we kept it simple. No frills; just good food, good atmosphere, and of course, great beer.

Pictured above: Dave and his dad on the soft opening night for the first DuClaw brewpub in Bel Air.

Oh right, we don’t have one of those. At DuClaw, there are no rules. For 25 years, we’ve taken risk after risk in pursuit of greatness. Craft be cherished, rules be damned. We brew by these six words and hey, we think it’s worked out pretty well.

When one of our brewers first took a sip of this beer, they exclaimed “Sweet Baby Jesus! That’s good.” And from there, a classic was born. First packaged in 2011, Sweet Baby Jesus skyrocketed in popularity, as many people were drawn to it simply because of the name.

Since then, the chocolate peanut butter porter has become a DuClaw classic and a year-round favorite. DuClaw also credits Sweet Baby Jesus as the catalyst that pushed DuClaw into distribution in other states. A beer so good, people exclaim the name!

Sweet Baby Jesus! — you did it again! In 2014, DuClaw Brewing Company won a bronze medal at the Great American Beer Festival for our renowned chocolate peanut butter porter.

Our First 16oz Can Release

Released in 2017, “Never Tell Me The Odds” was not only DuClaw’s first 16 oz can, but also the first brew in our popular IPA Series.

DuClaw’s lead brewman, Mark Johnson, set out to make a super juicy Double IPA on his homebrew system. When Mark shared his homebrew with the DuClaw team, we were blown away by his recipe and fast-tracked it for production to share with the rest of the galaxy.

And um, yeah, we’ll just leave it at that.

Pictured above: An epic pour featuring lead brewman, Mark Johnson, the mastermind behind “Never Tell Me The Odds”

DuClaw Brewing Company was inspired by Diablo Donuts, a local Baltimore donut shop that continuously pushes the envelope with its unique flavors and recipes. This is very similar to DuClaw’s approach to innovation through constant creativity, ideation, and testing.

The perfect collaboration was born when Diablo Donuts created a donut called Unicorn Farts that was topped with Fruity Pebbles and a drizzle of pink icing. Encapsulating the far-fetched flavors of Diablo’s donut, DuClaw’s Sour Me Unicorn Farts is a 5.5% ABV sour ale brewed with fruity cereal and edible glitter. A sparkly brew that is perfectly tart: Sour Me Unicorn Farts.

DuClaw beers are proudly distributed in 23 states, with the recent additions of Colorado and Texas. DuClaw brews can also be found internationally in Canada. We’re excited to continue expanding our distribution into more states in 2022.

The future is hazy but expect great things. In addition to brewing great beer, DuClaw is proud to be fostering exciting collaborations, creating brews with a mission behind them, and ultimately, making a difference in the community.

One thing is for certain: DuClaw will continue to cherish the craft and never follow the obvious path. And who knows, maybe even open a taproom.

*Disclaimer: All characters and events depicted in the following video are real…ish…