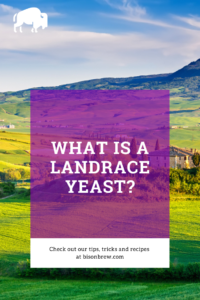 There is a rich history of brewing throughout Scandinavia, Northern Europe, and the Baltic countries. From Norway, to Lithuania, to Russia, traditional farmhouse beers have been drunk by locals for centuries. Yeasts local to each area have shaped regional flavors and brewing traditions. These domesticated, local yeasts are known as landrace yeasts.What Is A Landrace Yeast?

Landrace yeasts are a range of domesticated yeasts and mixed cultures. There are several types from traditional brewing regions around the world, mainly in the Nordic and Baltic countries. Traditional farmhouse brewers have used yeasts for generations to brew for their communities. Through years of human selection, these farmhouse yeasts evolved into distinct cultures. Depending on the region, farmhouse brewers have very different brewing techniques. Landrace yeast ferment under unique conditions with a wide range of characteristics.

Kveik is a landrace yeast, popular for its high fermentation temperature and clean flavor profile. In the last few years, interest in kveik from professional brewers and homebrewers has exploded. On top of kveik, there are several other types of landrace yeast that have been identified from a number of brewing regions.Types of Landrace Yeast

Landrace yeasts have a variety of characteristics, depending on where they’re from and how they’ve been used historically. Fermentation temperature, yeast pitching rate, and flavor all vary among the yeast families.

There is also a distinction between POF+ (phenol producing) and POF- (not phenol producing) strains. All kveik strains are POF-, meaning they’re clean fermenting without spicy or clove-like phenolics. Generally, landrace strains can be either POF positive or negative, depending on the type.

These are the main types and families of landrace yeast that have been identified so far:Kveik

The largest and most diverse landrace yeasts originate from traditional Norwegian farmhouse brewers. Kveik refers to yeasts, or mixed cultures, that have been used in Norway for generations. The yeast is very clean, even at hot fermentation temperatures up to 110°F. Kveik does not produce phenols and can be used for a wide variety of beer styles.Simonaitis

Another popular yeast among brewers world-wide is Simonaitis. This is a farmhouse yeast originating in Lithuania that has similar characteristics to kveik but it’s POF+. Like kveik, Simonaitis is fermented at hot temperatures. It produces fruit, spicy, and complex beers with very fast fermentation times.Jovaru Alus

Original Lithuanian farmhouse brewers Jovaru Alus brew all of their beers with their yeast, called Jovaru. Fermenting very warm, around 100°F, their beers finish quickly and are meant to be consumed fresh. Jovaru yeast is diastatic, meaning it can ferment beers to be very dry. It has a slightly spicy but clean, earthy fermentation profile.Rima and Marina

Two similar farmhouse mixed cultures from Chuvashia, Russia are called Rima and Marina. Both of these yeasts are blends of multiple ale strains that ferment on a wide range of temperatures. Traditional brewers pitch their yeast between 77°F to 100°F depending on the desired flavor. Spicy clove-like phenolics are accentuated near the upper range of the fermentation temperature. Fermented cooler, these yeasts ferment cleaner, with subdued esters and phenols.What Does Landrace Mean?

Landrace is a term used for plants and animals to denote a local, domesticated adaptation. The definition on its Wikipedia page summarizes it as:

“A landrace is a domesticated, locally adapted, traditional variety of a species of animal or plant that has developed over time, through adaptation to its natural and cultural environment of agriculture and pastoralism, and due to isolation from other populations of the species.”

From a brewing and yeast perspective, the term was first used in a research paper to help pool regional farmhouse yeasts. Landrace yeast was proposed to generalize all types of regional, domesticated yeast cultures.Where Are Landrace Yeasts From?

Landrace yeasts can be found in Nordic and Baltic countries, such as Norway, Finland, Lithuania, Russia, Latvia, and Estonia. Generations of farmhouse brewers have used specific yeasts for centuries, in some cases. Shared through family or among neighbors, these traditional yeasts have unique regional characteristics.

With growing research into landrace yeast, hopefully more families of yeast can be discovered in new areas.

Where Can I Buy Landrace Yeast for Brewing?

Kveik is the easiest type of landrace yeast to find. Most commercial yeast labs offer at least one strain of kveik. You can see our review from Lallemand’s new dried Voss kveik here. Most yeast labs make either liquid or dry kveik, which can be purchased from your local homebrew store or online retailers.

Non-kveik landrace yeast is not widely commercially available. There are a few innovative yeast labs producing certain types on occasion, such as:

If you’re interested in brewing with traditional farmhouse yeast, reach out to these labs for more information.Final Thoughts

Although the kveik family of yeasts are well understood, landrace yeast – in general – remains a growing area of research. In the last few years, many strains of kveik have been isolated.

In the future, we hope that more traditional landrace yeasts are widely available for brewers around the world. These unique yeast strains offer incredible flavors with a direct connection to brewing history.Frequently Asked QuestionsIs kveik a landrace yeast?

Kveik is a landrace family of yeasts originating from Norwegian farmhouse breweries.

Because of the widespread popularity of kveik yeasts, they’re often talked about separately than the rest of landrace yeasts. Kveik is a genetically unique, POF- landrace yeast.Where can I drink farmhouse ales made with landrace yeast?

Along with traditional farmhouse brewers, many commercial breweries in Norway use kveik. On top of that, with its growing popularity, many craft breweries around the world use kveik yeast. We covered a few in our kveik article.

Breweries using non-kveik landrace yeast are mainly limited to traditional farmhouse breweries. But because of the recent interest in landrace strains, craft breweries have started to experiment with them.