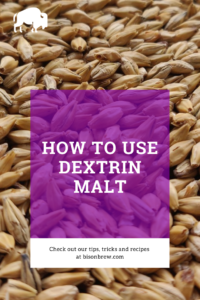 A mainstay in homebrew recipes for decades, dextrin malt is said to boost mouthfeel, body, and head retention in beer. Considered a simple fix for many homebrewing problems, dextrin malt is a mysterious product with a complicated story.What is dextrin malt?

Dextrin malt is a type of malted barley used in brewing to increase dextrins in wort and finished beer. Dextrins are long-chain sugars that are unfermentable by brewer’s yeast. These leftover sugars increase the body and mouthfeel of a beer. Most maltsters make dextrin malt, each with proprietary techniques and unique malt characteristics. Dextrin malts are usually produced similar to crystal malts, but they contribute minimal flavor due to the very pale color. This type of malt is used in both all-grain and extract brewing.

Dextrin malt, sometimes spelled dextrine malt, is extremely common in homebrew recipes. Recently, however, many brewers have questioned the usefulness of dextrin malt. Does it contribute everything it claims to the finished product? And how should brewers best use dextrin malt to obtain its positive effects in beer?When should you use dextrin malt?

Dextrin malt is used during the mash step in all grain brewing, and during the steeping step in extract brewing. The flavor and color contribution from dextrin malt is minimal, so the grain can be used in any style of beer.

You should use dextrin malt if you want to boost the body of your beer and add a fuller mouthfeel. What this means is that there will be more dextrins in the finished beer. These dextrins add to the viscosity of the beer, contributing to a perceived fuller mouthfeel and richer body.

Dextrin malt is used during the mashing process in all grain brewing. Replace 2-3% of your base grain with dextrin malt. Mill the grain and perform your mash as usual. The mashing process will extract fermentable sugars from the malt and the good stuff, the dextrins.Extract Brewing

Dextrin malt is a great option to use for extract brewers. Extract beers often lack in mouthfeel and malt flavor. Fresh milled dextrin malt provides a bit of malt complexity while also contributing to a fuller body.

To use, steep 1 pound of crushed Carapils – per 5 gallon batch – in a mesh bag while heating your extract brewing water.

We’ll go over a few different types of dextrin malt in the next section. For extract brewing, stick to Briess Carapils since it’s a fully crystal malt – suitable for steeping. Weyermann Carafoam needs to be mashed to convert the sugars and avoid starch haze in the finished beer.Types of dextrin malt

Most malters produce a dextrin malt, each with their own commercial name and proprietary malting process. The most popular for homebrewers are Carapils, CaraFoam, and DextraPils.Briess Carapils

Carapils is the most common type of dextrin malt you’ll see in homebrewing recipes. In the U.S., it’s a trademarked brand by the Briess malting company. Outside of the States, you might see various maltsters using the name.

Briess Carapils is a crystal malt. That means the starches inside the grain husk have already been converted to sugars during the malting process. The grain is hard and shiny, referred to as “glassy”. Because it’s a fully crystal malt, it can be steeped or mashed to extract the sugars.

Carapils should be used for 2-3% of the total grain bill. You can safely replace a portion of the base grain – like Pilsner malt – with Carapils. It won’t contribute any flavor or color.

For session beers, Briess recommends using up to 10% of the total grain bill. This will help those typically thin beers with a boost in mouthfeel and body, despite a low original gravity.Weyermann Carafoam

Carafoam is the Weyermann version of a dextrin malt. Unlike Carapils, Carafoam is not a true crystal malt. Carafoam is only about 2.5% crystal or glassy – meaning it’s more similar to a base malt than a crystal malt. For this reason, Carafoam should not be used as a steeping grain and must be mashed to convert the starches to sugars.

Carafoam will contribute less dextrins per pound than Carapils, but since Carafoam is closer to a base grain, you can use it up to 40% of the total grist.

Note that outside of the U.S., Weyerman Carafoam is actually called Carapils. Meaning that Weyermann Carafoam and Weyermann Carapils are the same product, just in different regions.DextraPils

DextraPils is produced by the Great Western Malting Company. It’s very similar to Briess Carapils, in that it’s a nearly 100% glassy malt. You can use DextraPils for steeping in extract batches, or mashing in all grain brews.Other Brands

If using dextrin malt from a different maltster, always verify the type of malt. Is it fully glassy, like Carapils, or is it only partially crystal, like Carafoam? Knowing the type of dextrin malt will help you better utilize the grain in your homebrewing.

Grain analysis is usually available through the maltsters’ websites. You may find that for dextrin malt, obtaining information can be tricky. Malt companies like to guard their proprietary processes for this type of grain.Final Thoughts

Dextrin malt is a convenient and easy tool to help boost mouthfeel and body in your homebrew. Although there are skeptics, dextrin malts like Carapils do have their place in brewing. If you feel that your beer is a bit thin, consider replacing a portion of the base grain with a dextrin malt. That small adjustment could give your beer the extra kick to take it to the next level.Frequently Asked QuestionsDoes dextrin help with head retention?

Despite what this research shows, dextrin malt is still marketed for improving head retention. On top of that, many homebrewers can provide plenty of anecdotal evidence to suggest it works.

If you’re skeptical, but want to increase your beer’s foam, consider a few other techniques. You can try mashing at a higher temperature, increasing the beer’s carbonation, or using higher protein grains, like wheat. Also, never clean your brewing equipment with dish soap – which leaves traces of foam-destroying oil. Use a brewery cleaner like PBW or OxiClean.Is Carapils the same as Carafoam?

Depending on where you live, the answer to this question can be tricky!

In the U.S., Carapils is a trademarked brand of the Briess malting company. Outside of the U.S., however, Carapils is used as a generic term for any type of dextrin malt.

German maltsters Weyermann sell Carafoam in the U.S., their brand of dextrin malt. Outside of the U.S., Weyermann calls it Carapils.

Briess Carapils is a completely crystal malt. The Weyermann dextrin malt (either Carafoam or Carapils) is only about 2.5% crystallized.