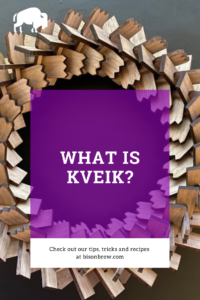 Norway is famous for its striking fjords, beautiful scenery, and more recently – at least in the beer world – farmhouse ale yeast. Brewers all over the world have become fascinated with the unique characteristics of a Norwegian yeast called kveik.What is kveik?

Kveik is a domesticated brewing yeast originating from traditional Norwegian farmhouse breweries. Kveik can be fermented at temperatures as high as 110°F, which promotes extremely fast and efficient fermentation times. Despite the high temperature, kveik does not generate off-flavors like fusel alcohols. Kveik is a general term for a family of Norwegian farmhouse yeasts that have been passed down through generations. The most flavorful and viable strains have withstood the test of time and, because of this, kveik is resilient. It can be dried, stored, and used for years.

In Norway, kveik has been traditionally used to ferment a range of farmhouse beer styles. Infusing the mash with juniper branches is quite common, which imparts a fresh and herbaceous botanical flavor. Traditional ales are also often unboiled, allowing for a natural acidity due to lactobacillus and other bacteria. On the other hand, many brewers choose to boil over wood fire, imparting a rustic smokiness.

Modern brewers use kveik strains to ferment a variety of beers, from IPA, English ales, and even lager-like beer. Kveik is versatile, efficient, and convenient to use for both professional brewers and homebrewers.How To Say Kveik

How do you say kveik? Well, it can be challenging for the non-Nordic. A close approximation in English is kuh-vike, spoken quickly, in almost one syllable.What Does Kveik mean?

Kveik is a Norwegian dialect term meaning “yeast”. In the brewing world, kveik has become a moniker for a family of strains of brewing yeast derived from traditional Norwegian brewers.Fermentation Temperature

Kveik, on the other hand, can easily ferment up to 110°F and produce no off-flavors, fusels, or alcoholic bite.

The fermentation temperature range for most kveik strains is also extremely wide. That’s great news for homebrewers who don’t have suitable temperature control. You can ferment most strains at 65°F or at 100°F with similar results, and little worry of off-flavors.Fermentation Time

Many kveik fermentations take off within hours of pitching the yeast, and can be fully attenuated in 24 to 72 hours. This rapid fermentation time, in contrast to traditional brewing yeasts, allows brewers to turn around beers in days, not weeks. And because of the clean fermentation profile, beer is ready to drink, without any off-flavors, as soon as it’s carbonated.Pitching Rates

Most kveik strains can be pitched at significantly lower pitching rates than typical ale yeast. Kveik can be pitched into average density wort (1.050 – 1.060 OG) at a rate of 1-2 million cells/mL. This is 20-25% of a normal pitching rate and translates to about 1 level teaspoon of slurry or dried kveik, per 5 gallons of wort.

Using kveik at normal ale pitching rates is also suitable for most strains. In fact, the pitch rate for kveik has not shown to influence flavor or other beer characteristics significantly.Storing Kveik

Kveik’s resilient nature, through generations of human selection, means that it can be stored in a number of ways. Traditional Norwegian brewers passed down kveik in dried format. Other brewers used a gjærkrans which is a wooden ring shaped yeast storage device. The ring was added to the fermenting basin and left to ferment the wort. After that, the ring is hung to dry. The kveik lives on and in the porous wood, ready for the next brew.

Homebrewers can also dry their own kveik after brewing. Simply harvest a slurry of kveik and spread it in a thin layer on clean, greaseproof baking paper, at about ⅛” to ¼” thick. Allow to dry in an oven with the oven light turned on, for about 24 hours, until the liquid has evaporated. Dried kveik flakes can be stored in a freezer bag, in the freezer, for years.Varieties of Kveik

To date, over 60 varieties have been documented from across Norwegian farmhouse breweries. Kveik can be used as an isolate, or a mix of strains – as is traditional.

Choosing which variety of kveik to use depends on a few things, but the most common for commercial and homebrewers are the following:

To taste a real, farmhouse kveik, you’ll need to take a trip to Norway and find a farmhouse brewer willing to exchange some of their beer and stories. Norwegian craft breweries have also started to brew with kveik more and more. Leading the charge are Eik & Tid and Voss Bryggeri.

In the U.S., kveik is slowly catching on with commercial brewers who mainly use it to brew hoppy styles like NEIPA.

Eik & Tid is a small brewery based in Oslo, Norway. They’ve made a name for themselves across Norway and the rest of Europe for their modern beers using Nordic brewing tradition and technique. Mosaikk is a raw pale ale, hopped generously with Mosaic hops and fermented with kveik. It’s fruity, funky, rustic, and delicious.Vossaøl 1814, Voss Bryggeri

Voss Brewing is located in Voss, Norway, a region famous for its kveik strain that shares the same name. Vossaøl 1814 is their very traditional interpretation of a classic farmhouse kveik beer. It’s mashed with juniper and boiled for 4 hours over an open flame, then fermented with their house kveik culture. Smoky, spicy, and fruity, this beer’s as close to a traditional farmhouse ale that you can find commercially.Kveik Minded, Burnt City Brewing

Farmhouse brewers have used kveik for centuries. But recent interest across the brewing world has put a spotlight on this curious Norwegian family of yeasts. Kveik offers brewers flexibility in fermentation temperature, saving time and money. It also helps produce some very delicious tasting beer.

For the full history of kveik, check out Lars Marius Garshol new book Historical Brewing Techniques: The Lost Art of Farmhouse Brewing. His in-depth look into the history of kveik is fascinating and inspiring for brewers and beer enthusiasts alike.Frequently Asked QuestionsCan you buy kveik yeast?

At one time kveik was only shared between farmhouse homebrewers inside Norway. It’s now easily accessible outside the country’s borders. Most commercial yeast labs offer kveik in either dried or liquid formats.

We tested out Lallemand LalBrew Voss Kveik – see our review.Is kveik an ale or a lager yeast?

Kveik is a family of domesticated farmhouse ale strains, which are top-fermenting. Many brewers use Kveik yeast to make a lager-like beer due to the extremely clean fermentation profile of certain strains.