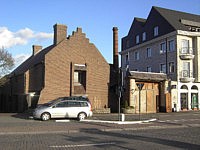 Brewery De Ryck is a brewery in East Flanders Herzele (Belgium). Founded by its namesake family in 1886, today the brewery is still in their possession and management.

The brewery was founded by former tanner Gustaaf De Ryck in 1886 after the occupation of brewer was teaching in Bremen, Germany. The creation took place near the Church of Herzele, he used this initial Brewery Golden Eagle as a denomination. Because of the First World War, the business was forced discontinued and in 1920 was started again under the name of Brouwerij De Ryck.

Three generations later, and eight different traditional beers are brewed there now headed by a female brewer. The granddaughter of the founder, An De Ryck, and studied courses in England and Bavaria.