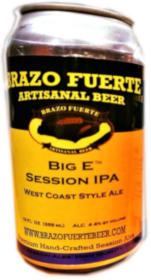 Big E is an American beer, it has an alcohol content of 4.4%.

Big E Session IPA is an easy-drinking session beer with a lot of character. This beer has a west coast-style hop burst, brewed with 4 different hops that add fruity, tropical and earthy flavors with just the right amount of bitterness. Why is it named “Big E“? A rugby teammate and friend, named Erin, moved out west and developed a taste for hoppy west-coast-style beers. She also started training for 50 mile marathons. Can we say “Rock Star!?!” This beer was made with her in mind. It had to taste amazing and also had to be a beer she’d want to enjoy as a guilty pleasure in between trainings. Actually, the beer is named after Erin’s sweet, adorable border collie mix, who trains with Erin, named…Big E. Big E is not a big dog, but she has a huge personality, just like this beer.