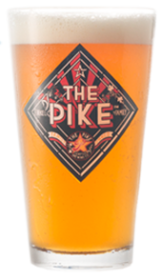 Pike Third Story is an American beer, it has an alcohol content of 7.5%.

Beers in the Third Story series will be brewed one time only as frequently as possible and will be available only on draft for their limited and delicious time.

First from Third Story series is a fun to drink hazy IPA. Big hop aromas greet you followed by a playful juicy sweetness reminiscent of mandarin oranges. Take a break from bitterness and indulge in all the juicy, citrus flavors of Centennial and Mosaic hops with this hazy IPA.