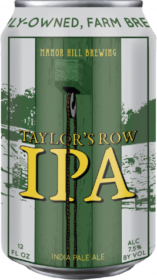 Taylor’s Row IPA is an American beer, it has an alcohol content of 7.5%.

Connecting with local history is very important to Manor Hill Brewing. So to commemorate the opening of Manor Hill Tavern, in the historic “Taylor’s Row” section of Old Ellicott City, they have decided to bring back Volume 2 from their limited release Hidden Hopyard Series. For this brew they used locally sourced rye malt from Copper Fox Distillery. Aggressively hopped with Simcoe, Centennial and CTZ, this American IPA boasts a big grapefruit aroma that is followed by a juicy mouthfeel and resiny finish.