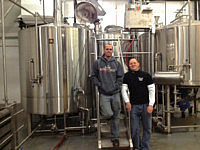 In this time of exploding craft brewing around the country you really need to step up your game to stand out in the crowd. No shortcuts. No easy way outs. When we brew, we brew with the best ingredients, the best equipment, and complete devotion to making the best beer we possibly can. This passion, however, did not arise over night. It fermented for years into what is now known as Full Tilt Brewing.

In 2008 Full Tilt Brewing owners and cousins Nick Fertig and Dan Baumiller were a world apart but connected by their passion for good beer. It was that year that each independently started looking into home brewing. Nick, while serving in the U.S. Navy and, Dan, working in acquisitions for the Department of Defense began researching the possibilities of entrepreneurship through brewing beer. Nick got out of the Navy in August of 2008 and he and Dan began discussing beer brewing immediately as both a hobby and entrepreneurial dream. They purchased a homebrew kit shortly thereafter and have since transitioned a joyful hobby into a sharable passion.

By combining traditional and modern ingredients to develop uniquely crafted beers, Full Tilt Brewing has built a grass roots following in the Baltimore City region. Utilizing this network of family and friends for feedback, Full Tilt Brewing has tested each of its designs in order to provide the highest level of quality and taste. Learning from each success and mistake, Full Tilt Brewing has grown in craftsmanship and demand. Full Tilt Brewing’s event history includes several homebrew tasting events with over 40 original brewed beers sampled by scores of people and their annual Oktoberfest event, which in its third year (2011) attracted 110 people to taste 8 original brews. In addition Full Tilt Brewing was awarded first prize in a Leinenkugel home brew contest in September 2011 thus providing outside affirmation of the company’s brewing capabilities.

Beyond these events, Full Tilt Brewing has built a network of industry contacts and relevant resources including several local Baltimore City bars that have expressed interest in purchasing Full Tilt Brewing products once commercially available as well as a partnership with the University Of Maryland Smith School Of Business to shape the company business plan. These contacts have allowed Full Tilt Brewing to establish credibility in a short amount of time and position the company for the next step toward a fully operational business.