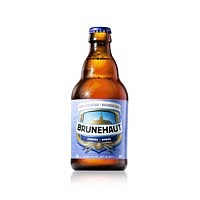 Brasserie de Brunehaut is a Brewery, located in Rongy-Brunehaut (Hainaut), Wallonia, 80 km south/southwest of Brussels, Belgium, near the French border.

In 1890 the Allard family founded the Brunehaut brewery in Guignies, then called the St Joseph Brewery. It became known in the region for brewing beers like “La Druide” and “Brunehaut 8°”.

In 1991 the company took on a new challenge and moved into modern buildings while maintaining its traditional character and the quality of its products, qualified as “grand crus” by connoisseurs. An alliance of Modernity and Tradition!
These are the company’s motto, a real creed for the managers at Brunehaut Brewery.
Tradition, because the traditional brewery retains the entirely natural brewing method for late fermentation beers and that are refermented in bottles and kegs. The result: a panel of about a dozen abbey or organic beers, all valuable and unique. To ensure that the link to the region remains strong, the types of barley used in the brewing process are grown in our own farm at Gaurain-Ramecroix.
Modern, because modern and high performance machinery ensure scrupulous compliance with hygiene regulations and a top quality production with consistent flavour. Also modern in how we deal with the market: several beers from Brunehaut won prizes at international competitions and are currently present in 25 different countries.
Marc-Antoine De Mees and his staff are still equally enthusiastic to allow the discovery of this knowledge and method…