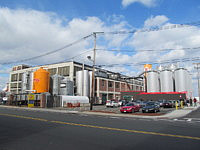 Harpoon Brewery is an American brewery from Boston, Massachusetts.

Harpoon was started in 1986 by Dan Kenary, Rich Doyle, and George Ligeti. They were three friends who loved beer and loved drinking beer together but found the beer choices at the time to be limited. Traveling through Europe and experiencing the rich traditions of European brewing and beer drinking enhanced their love of beer and opened their eyes to the rich beer culture they wanted back home. They decided to build a brewery so that they could brew the beers that they wanted to drink, and invite their friends to the brewery to drink it with them.

In June of 1987, a warehouse space on the Boston waterfront was transformed into a brewery and the first Harpoon Ale was brewed. Fresh, local craft beer began making its way out to Boston beer drinkers. It was hard to imagine that craft brewing would become what it has today. Though many things have changed since the early days of Harpoon, much has stayed the same. We still love brewing beer and enjoying it with friends. One thing that has changed: in August 2014 Harpoon became an employee owned company!

We invite all of you to visit our Boston brewery, where it all began, and our beautiful brewery in Windsor, Vermont. Come have a beer with us soon!